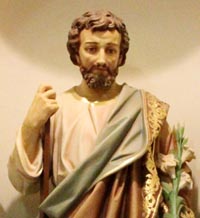 UPDATED — VATICAN CITY (CNS) — Pope Francis and retired Pope Benedict XVI have a special devotion to St. Joseph and have assured that devotion regularly will be shared at Mass by Catholics around the world.

The Congregation for Divine Worship and the Sacraments said Pope Francis confirmed a decision originally made by Pope Benedict to include St. Joseph permanently in the eucharistic prayers used at most Masses in the Latin rite.

(See the text of the prayers for the Mass in English.)

A decree signed May 1 by Cardinal Antonio Canizares Llovera, congregation prefect, and Archbishop Arthur Roche, congregation secretary, said Pope Benedict had received petitions from Catholics around the world and approved adding after the name of the Virgin Mary, the words “with blessed Joseph, her spouse.”

A congregation official told Catholic News Service June 18 that national bishops’ conferences could set a date for the changes to begin if they believe that is necessary, “but because it is a matter of only adding five words, priests can begin immediately.”

The decree described St. Joseph as “an exemplary model of the kindness and humility that the Christian faith raises to a great destiny, and demonstrates the ordinary and simple virtues necessary for men to be good and genuine followers of Christ.”

St. Joseph, “caring most lovingly for the Mother of God and happily dedicating himself to the upbringing of Jesus,” has been the subject of deep Catholic devotion around the world for centuries, the decree said.

The congregation provided bishops around the world with the exact wording to use for Masses in Latin, English, Spanish, Italian, Portuguese, French, German and Polish.

Pope Francis, who has a flower used as a symbol of St. Joseph on his coat-of-arms, also chose the March 19 feast of St. Joseph as the date for his inaugural Mass.

In his homily at the Mass, Pope Francis said that in the Gospels, “St. Joseph appears as a strong and courageous man, a working man, yet in his heart we see great tenderness, which is not the virtue of the weak, but rather a sign of strength of spirit and a capacity for concern, for compassion, for genuine openness to others, for love.”

The new pope said exercising the role of protector as St. Joseph means doing so “discreetly, humbly and silently, but with an unfailing presence and utter fidelity, even when he finds it hard to understand.”

St. Joseph responded to his call to be a protector “by being constantly attentive to God, open to the signs of God’s presence and receptive to God’s plans, and not simply his own,” the new pope said.

Pope Benedict, who was born Joseph Ratzinger and celebrated the March 19 feast of St. Joseph as his name day, told a crowd in Cameroon in 2009 that he had “received the grace of bearing this beautiful name.”

“Throughout all of history, Joseph is the man who gives God the greatest display of trust,” even in the face of the astonishing news that Mary was to bear a child, Pope Benedict told the crowd.