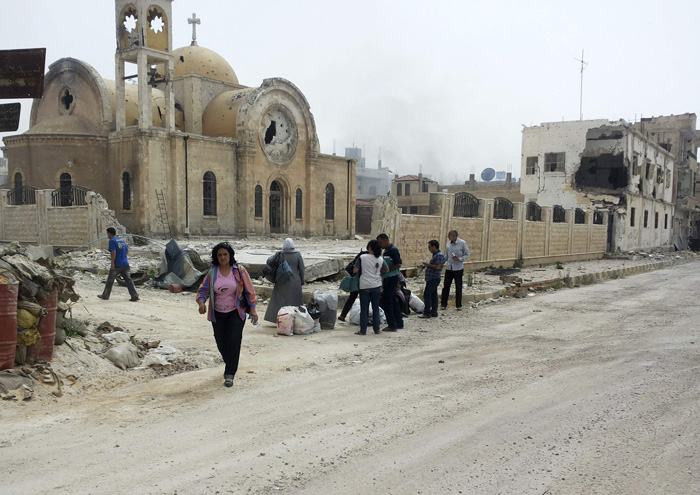 WASHINGTON (CNS) — Two bishops have called for the United States to seek a negotiated cease-fire in Syria’s civil war rather than arming combatants.

Citing Pope Francis’ Easter plea for peace in Syria, Bishop Richard E. Pates of Des Moines, Iowa, chairman of the U.S. bishops’ Committee on International Justice and Peace, and Bishop Gerald F. Kicanas of Tucson, Ariz., chairman of the board of Catholic Relief Services, said the suffering of civilians would be best addressed if fighting ended.

“Instead of arming both sides, the international community should be emphasizing the need for a negotiated solution to the conflict,” the bishops wrote in a letter to U.S. Secretary of State John Kerry (see the full text of the letter here). “The introduction of more arms simply increases the lethality of the violence and contributes to the suffering of the Syrian people.”

The bishops also referred Kerry to the pope’s letter to the leaders of the Group of Eight nations, which concluded a two-day meeting in Northern Ireland June 18. In his letter, Pope Francis urged the G-8 leaders to seek a cease-fire and to bring all parties to the negotiating table.

The summit ended without agreement on a course of action other than to support plans for a Syria peace conference in Geneva to begin “as soon as possible.”

Bishops Pates and Kicanas expressed support for such a conference and offered the help of the U.S. Conference of Catholic Bishops if needed.

“The Syrian people urgently need a political solution that ends the fighting and creates a future for all Syrians, one that respects human rights and religious freedom,” the bishops said. “We ask the United States to work with other governments to obtain a cease-fire, initiate serious negotiations, provide impartial and neutral humanitarian assistance and encourage building an inclusive society in Syria that protects the rights of all its citizens, including Christian and other minorities.

NEXT: Vatican calls for copyright changes to give better access to the blind