Catholic charities appeal for help after flooding in Central Europe 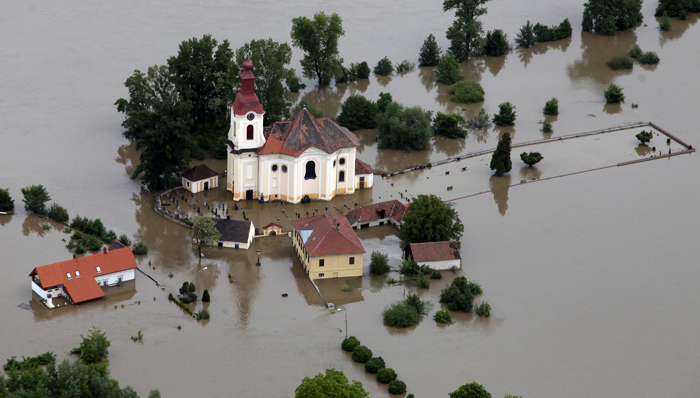 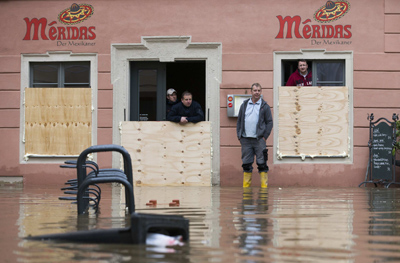 Men look out from a restaurant at floodwaters in the town of Prina in east Germany June 4. (CNS photo/Thomas Peter, Reuters)

BONN, Germany (CNS) — Catholic charities in Central Europe have appealed for help after floods devastated areas of Germany, Austria and the Czech Republic.

“The overall scale of this disaster will only be known in the next few days,” Wolfgang Duschl, spokesman for the German church’s Passau Diocese, said June 4. “But our own diocesan offices are closed, and analysts expect the material damage to run into tens of millions of euros.”

Duschl told Germany’s Catholic newsagency, KNA, Catholic schools and charities had been evacuated in Passau after local rivers, including the Danube, Inn and Ilz, reached their highest levels since the 16th century, cutting telephones and power supplies.

“In addition to financial measures, we also need human care and administrative support. People will still need assistance when the water recedes, as well as consolation for losses which money cannot replace,” he said.

Shipping was halted in Germany and Austria on the Danube and Rhine rivers, after water levels approached those of 2002, when similar floods caused 20 billion euros ($26 billion) damage in the region.

In the Czech Republic, where at least seven deaths were confirmed by June 4, the River Vltava reached 10 times its usual volume, threatening the historic old town and Charles Bridge in the capital, Prague, where the metro and sewage systems were closed as a precaution.

Tens of thousands of local residents were reported in temporary shelters around the flooded northern Czech town of Usti nad Labem, after the River Elbe burst its banks.

Czech Caritas director Lukas Curylo asked for volunteers to help with the disaster.

At least one flood-related death was also reported in Switzerland.

NEXT: Czech cardinal welcomes plan to pay billions to churches for property