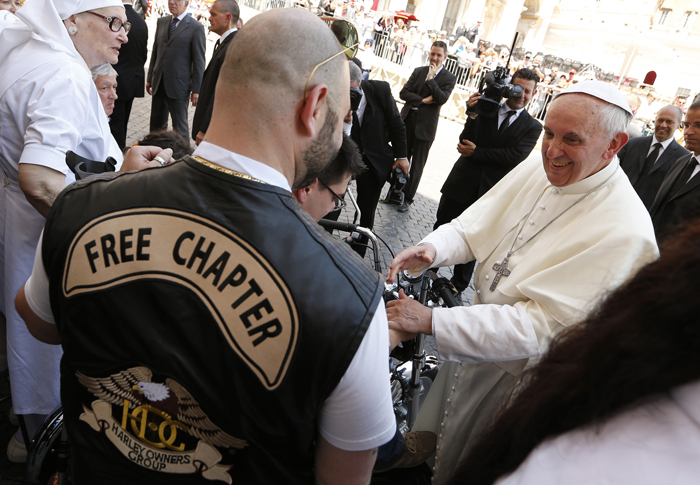 Pope Francis greets a Harley-Davidson biker as he meets with pilgrims who have disabilities following Mass in St. Peter's Square at the Vatican June 16. The Year of Faith Mass concluded a weekend of events calling attention to care for the aged, the sick, the unborn and those with disabilities. (CNS photo/Paul Haring)

Last weekend the citizens of Rome heard a unique soundtrack coming from the roaring pistons of some 35,000 Harley-Davidson motorcycles that had been arriving for days in the capital for the 110th anniversary celebrations of the American motorcycle maker’s founding.

There was room for faith among the rumbling engines, leather jackets and elaborate tattoos. Events began early in the morning of June 14 with Cardinal Angelo Comastri, archpriest of the Vatican Basilica, saying Mass in St. Peter’s Basilica for 2,000 of the participants.

Also, 1,400 bikes with their riders were blessed by Pope Francis at the Sunday Angelus June 16 as the main road leading up to St. Peter’s Square became a parade route for the motorcyclists.

St. Peter’s Square also welcomed all the other Harley-Davidson riders and enthusiasts arriving on foot who did not win a ticket for their bike.
During his Angelus address, Pope Francis greeted “the many participants in the Harley-Davidson motorcycle rally and the members of the Motorcycle Club of the Italian State Police.”

Concluding his address, the pope urged all to “turn to the Virgin, entrusting all human life, especially the most fragile, defenseless, and threatened, to her maternal protection.” 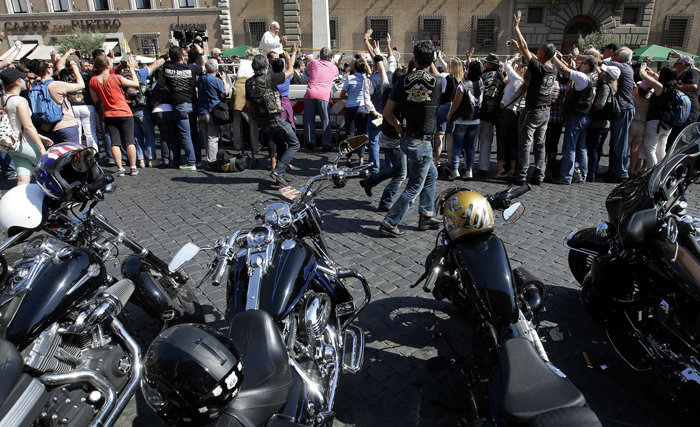 Pope Francis greets Harley-Davidson riders on Via della Conciliazione before celebrating Mass in St. Peter’s Square at the Vatican June 16. Hundreds of bikers lined the main road leading to the Vatican before the Mass. (CNS photo/Max Ross, Reuters)