Keeping up with Francis: The nuances of Vatican communications 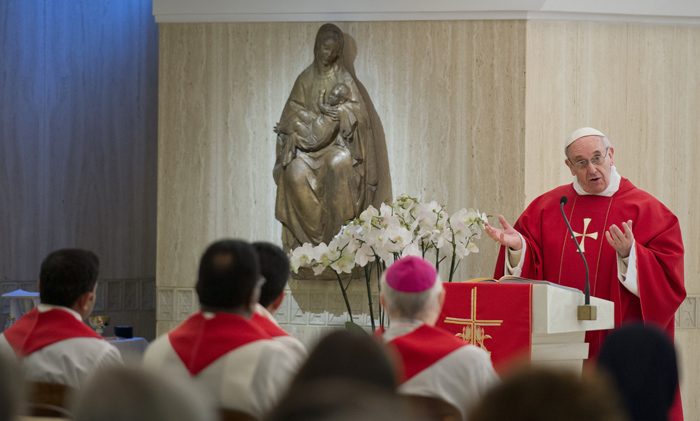 VATICAN CITY (CNS) — Of the various innovations that Pope Francis has already introduced into the way a pontiff lives and works, one of the most significant is his celebration of weekday morning Masses with invited guests.

The practice is revealing of the new pope’s character and of how he understands his role as leader of the universal church, and it exemplifies the challenge he presents to the Vatican apparatus surrounding him.

Pope Francis is not the first pope to include outsiders at his morning Masses. The gregarious Blessed John Paul II was regularly joined by as many as two dozen people, including visiting bishops and laypeople, in his private chapel in the Apostolic Palace.

But Pope Francis, who has chosen to live in the Vatican guesthouse, has been celebrating Mass there with more than 50 people each morning, systematically working through the ranks of personnel of the Roman Curia and Vatican City State, high officials and maintenance workers alike.

And while Blessed John Paul typically followed the reading of the Gospel in his private Masses with a period of silent reflection, not a homily, Pope Francis has been delivering short sermons in the folksy style that has become his trademark.

These morning homilies, excerpts from which usually appear the same day in the Vatican newspaper and on Vatican radio, have been the occasion of some of the pope’s most quotable remarks. In recent weeks, he has told his congregation that “Satan always rips us off” and that a Christian should reflect joy rather than showing the “face of a pickled pepper.”

At times, the identity of those attending a given Mass has seemed to lend a special significance to the pope’s words. When he told a group of staff members from the Vatican bank that “offices are necessary, but they are necessary only up to a certain point,” many observers took it as a sign of imminent change at the controversial financial institution.

While some may be reading unwarranted meaning into the pope’s words, he clearly intends his sermons to affect how his collaborators see their roles and obligations.

“When a bishop, a priest goes on the road to vanity, he enters into the spirit of careerism and … ends up being ridiculous,” the pope said May 15.

Such frankness, so uncustomary for the office, has naturally piqued the public’s (or at least the press’) desire for more, in the form of complete transcripts. But the Vatican spokesman has announced that this desire will remain unsatisfied.

Jesuit Father Federico Lombardi explained May 29 that, because the pope gives his off-the-cuff morning homilies in Italian, not his native Spanish, the Vatican would never release a full transcript without “rewriting of the text on several points, given that the written form is different from the oral.” Such treatment would be inappropriate in this case, Father Lombardi added, because the more formal character of the resulting document would not be true to the “familiar” atmosphere that Pope Francis desires for his morning Masses.

The statement was puzzling, since the extensive textual excerpts and audio clips of the homilies already available do nothing to disguise the unpolished nature of the pope’s words. Why would such imperfections become unacceptable only when quoted at full length?

“In the whole of the pope’s activity,” the spokesman continued, “the difference is carefully preserved between the various situations and celebrations, as well as the different levels of commitment of his pronouncements.”

Public “homilies or addresses are transcribed and published in full,” Father Lombardi said, but not the pope’s words on “more familiar and private” occasions.

The Jesuit might have added that officials in the Secretariat of State ordinarily read the pope’s public statements ahead of time and approve the texts and translations that the Vatican officially releases to the press. Such review is obviously not possible when the pope ad-libs.

That the Vatican has declined to publish full transcripts of the morning homilies is less significant than the decision to relegate publication of excerpts and summaries to its in-house journalists, rather than the pope’s official spokesman. Using less prestigious vehicles to transmit some of the pope’s words is evidently meant to convey a lower “level of commitment” on the part of the pope himself.

Such distinctions are likely to be lost on most readers and listeners, if the experience of Pope Francis’ predecessor is any guide.

Pope Benedict XVI published his bestselling trilogy of “Jesus of Nazareth” books under the name Joseph Ratzinger, to make clear that they did not form part of his papal magisterium. Yet when the second volume of the series reiterated and elaborated on the Second Vatican Council’s teaching that the Jewish people have no collective responsibility for the death of Jesus, Jewish leaders directed their thanks and praise not to an elderly German theologian but to the leader of the Catholic Church.

Likewise, after Pope Benedict speculated in an interview on the ethical nuances of condom use for disease prevention, the ensuing controversy could hardly have been greater had he done so in an encyclical or other papal document.

In the age of smartphones and social media, the border between public and private has practically vanished, even for a pope, especially one as outgoing and spontaneous as Pope Francis. Communications is thus one area — almost certainly not the only one — in which the Vatican bureaucracy will be struggling to keep up with its new boss.

NEXT: Hamas order would lead to the closing of two Catholic schools in Gaza