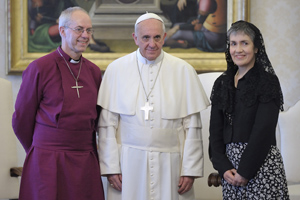 VATICAN CITY (CNS) — Pope Francis and Anglican Archbishop Justin Welby of Canterbury, spiritual leader of the Anglican Communion, pledged to support each other with their prayers and to continue the search for full unity between their communities.

Meeting at the Vatican June 14, praying together in the Redemptoris Mater Chapel in the Apostolic Palace and eating lunch together in the papal residence, both remarked on the fact that Pope Francis’ inaugural Mass was celebrated March 19 and Archbishop Welby’s installation was March 21.

“Since we began our respective ministries within days of each other, I think we will always have a particular reason to support one another in prayer,” Pope Francis said. He also thanked the new Anglican leader for praying for him during his installation at Canterbury Cathedral.

Archbishop Welby told him, “I pray that the nearness of our two inaugurations may serve the reconciliation of the world and the church.”

The two spent more than 30 minutes meeting privately, with an interpreter, before giving their speeches, exchanging gifts and joining about 100 Catholics and Anglicans from Rome for the prayer in the Redemptoris Mater Chapel.

In their speeches, the two Christians leaders did not ignore the issues that have stalled hopes for unity in recent years.

“The history of relations between the Church of England and the Catholic Church is long and complex and not without pain,” Pope Francis told Archbishop Welby. However, he said, “firm bonds of friendship have enabled us to remain on course even when difficulties have arisen in our theological dialogue that were greater than we could have foreseen at the start of our journey.”

In recent years, the Catholic-Anglican dialogue — like the Anglican Communion itself — has had to deal with differences over the ordination of women as priests and bishops, with the blessing of homosexual unions in some Anglican communities and with questions regarding the ordination of openly gay bishops.

In response to requests from Anglicans who wanted to join the Catholic Church, but also wanted to preserve their Anglican spiritual and liturgical heritage, Pope Benedict XVI in 2009 established Anglican ordinariates, jurisdictions similar to dioceses.

Pope Francis thanked the Anglicans for making “sincere efforts” to understand Pope Benedict’s provisions. The Anglican ordinariates, he said, “will enable the spiritual, liturgical and pastoral traditions that form the Anglican patrimony to be better known and appreciated in the Catholic world.”

Despite new challenges, the pope said, Catholics and Anglicans recognize their shared obligations to work for the unity Christ desired, to proclaim the Gospel, to defend Christian values and to serve the poor and speak on their behalf.

Pope Francis said the joint witness of Christian values is especially important today “in a world that seems at times to call into question some of the foundations of society, such as respect for the sacredness of human life or the importance of the institution of the family built on marriage, a value that you yourself have had occasion to recall recently,” the pope told the archbishop.

In early June, Archbishop Welby criticized a proposed bill in the British Parliament to recognize gay marriage. The archbishop said with the bill, “the concept of marriage as a normative place for procreation is lost. The idea of marriage as covenant is diminished. The family in its normal sense predating the state and as our base community of society is weakened.”

Like Pope Francis, Archbishop Welby has been an outspoken critic of the way modern financial and economic structures place profit above the good of persons.

“We share many ideas” on the topics of economics, social justice and peace, Pope Francis told him. “As you yourself have observed, we Christians bring peace and grace as a treasure to be offered to the world, but these gifts can bear fruit only when Christians live and work together in harmony.”

Archbishop Welby told the pope that for many years he has “found inspiration in the great corpus of Catholic social teaching and worked on its implications with Catholic groups.”

“We must love those who seek to oppose us,” the archbishop said, “and love above all those tossed aside — even whole nations — by the present crises around the world.”

“Even as we speak,” he said, “our brothers and sisters in Christ suffer terribly from violence, oppression and war, from bad government and unjust economic systems. If we are not their advocates in the name of Christ, who will be?”

The ecumenical journey “is testing and we cannot be unaware that differences exist about how we bring the Christian faith to bear on the challenges thrown up by modern society,” Archbishop Welby said. However, friendship makes it possible to discuss the differences and “to be open to sharing the discernment of a way forward that is faithful to the mind of Christ.”