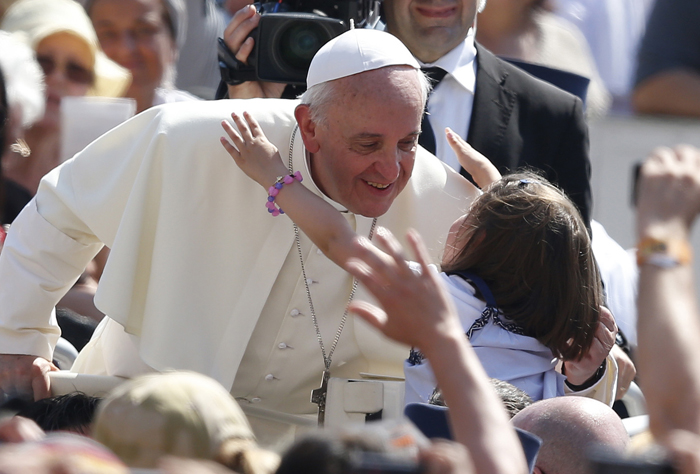 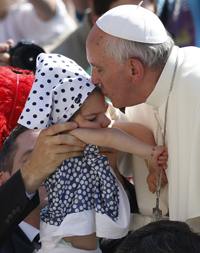 Pope Francis kisses a child as he arrives to celebrate Mass in St. Peter’s Square at the Vatican June 16. (CNS photo/Paul Haring)

VATICAN CITY (CNS) — Ideologies and practices that destroy human life arise from false ideas of freedom without God, Pope Francis told a crowd in St. Peter’s Square, including thousands of pro-life activists from around the world.

“Whenever we want to assert ourselves, when we become wrapped up in our own selfishness and put ourselves in the place of God, we end up spawning death,” the pope said in his homily during the Mass June 16.

The Mass was the culmination of a weekend dedicated to “Evangelium Vitae” (the “Gospel of Life”), a pilgrimage organized for the Year of Faith and named after the 1995 encyclical by Blessed John Paul II on the “value and inviolability of human life.”

“All too often,” Pope Francis said, “people do not choose life, they do not accept the ‘Gospel of Life’ but let themselves be led by ideologies and ways of thinking that block life, that do not respect life, because they are dictated by selfishness, self-interest, profit, power and pleasure, and not by love, by concern for the good of others.

“It is the idea that rejecting God, the message of Christ, the Gospel of Life, will somehow lead to freedom, to complete human fulfillment,” he said. “As a result, the living God is replaced by fleeting human idols which offer the intoxication of a flash of freedom, but in the end bring new forms of slavery and death.”

The pope did not mention any specific threats to life, but in an address at the end of Mass, Archbishop Rino Fisichella, president of the Pontifical Council for Promoting the New Evangelization, alluded to abortion and euthanasia.

“From the very beginning in the womb of a woman, until the very last moment when a person’s breath speaks of his or her presence in the world, this life is human, even if it develops into an immense array of conditions of weakness, suffering and demands for help,” said the archbishop, whose office organized the weekend pilgrimage.

Archbishop Fisichella drew attention to the presence in the square of “witnesses to Evangelium Vitae” from some two dozen countries, activists dedicated to the defense of “children left alone, abandoned women, the chronically ill, those with the most diverse disabilities and handicaps, people who are dying, the marginalized (and) the excluded.”

After Mass, Pope Francis followed his usual practice of individually greeting a number of disabled persons among the congregation. On a lighter note, the pope also offered a general greeting to hundreds of Harley-Davidson enthusiasts who attended the Mass in their biker vests during a Rome celebration of the motorcycle’s 110th anniversary.

One of the pilgrims in the crowd, Mary J. McClusky, a special projects director with the U.S. Conference of Catholic Bishops’ Secretariat of Pro-life Activities, praised Pope Francis for reminding listeners that forgiveness is available for even the worst sins.

“It’s what the world needs to hear, the assurance that whatever we do, God will always love us,” she said. “That’s what’s going to break hearts open and allow that love to flow in.”

McClusky was one of five USCCB staff members who traveled to Rome to help organize special activities for English-language pilgrims June 15, including an academic conference featuring an address by U.S. Cardinal Raymond L. Burke, head of a Vatican tribunal, and a holy hour of Eucharistic adoration led by U.S. Archbishop Joseph A. Di Noia, vice president of the Pontifical Commission “Ecclesia Dei.”

In his address, Cardinal Burke warned against the “anti-family agenda of the pervasive mass media” and urged his largely American audience to participate in “family politics.”

“The culture of death advances in good part because of a lack of attention and information among the public in general,” he said.

In a panel discussion following the cardinal’s talk, philosopher Francis Beckwith of Baylor University laid out some responses to arguments that deny the human being’s inherent personhood. Robert Royal, president of the Faith and Reason Institute, spoke of promoting a culture of life in the face of a “dictatorship of relativism.”

On the evening of June 15, an international group of some 2,500 pilgrims also took part in a prayer vigil, which included readings in various languages from Blessed John Paul’s “Evangelium Vitae,” and a candlelight procession to St. Peter’s Square.

Contributing to this story was Clare Myers at the Vatican. 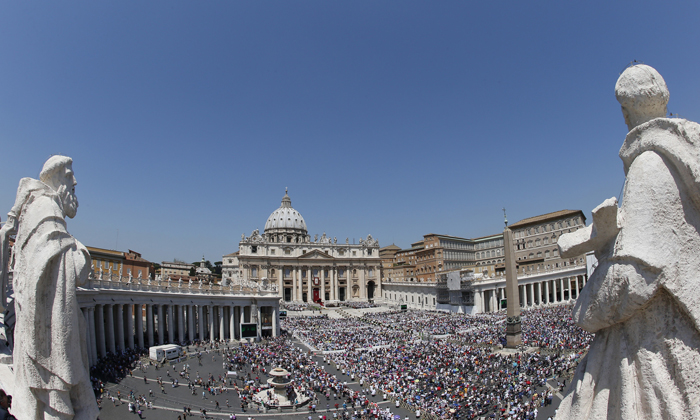 NEXT: Catholics, Lutherans look to commemoration of Reformation anniversary