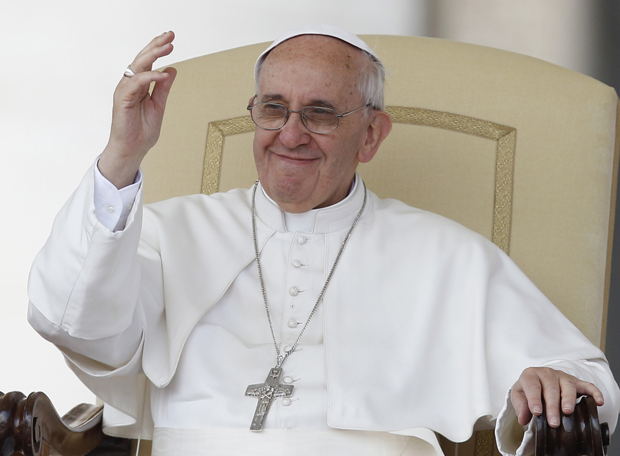 VATICAN CITY (CNS) — Pope Francis blamed widespread degradation of the natural environment and disregard for human life on an increasingly common “throwaway culture” that places no value on the needs of others.

“We are living through a moment of crisis,” the pope said June 5. “We see it in the environment, but above all we see it in man. The human person is in danger.”

The pope made his remarks during his weekly general audience in St. Peter’s Square. (See the full text of the pope’s remarks.)

Noting that the United Nations had designated June 5 World Environment Day, Pope Francis recalled the biblical account of creation, according to which God made man and woman to “cultivate and protect the earth.”

“Are we truly cultivating and protecting creation?” the pope asked. “Or are we instead exploiting and neglecting it?”

“We are often guided by the arrogance of domination, possession, manipulation, exploitation,” he said. “We are losing the attitude of wonder, of contemplation, of listening to creation, and thus we are no longer able to read there what Benedict XVI calls the ‘rhythm of the love story of God with man.'”

“We have distanced ourselves from God, we do not read his signs,” the pope said.

“What rules today is not man, it is money,” the pope said, denouncing an “economy and financial system lacking in ethics.”

“Men and women are sacrificed to the idols of money and consumption,” he said. “That some homeless people freeze to death on the street, that is not news. On the other hand, a drop of 10 points in the stock markets of some cities is a tragedy. That is how people are thrown away. We, people, are thrown away, as if we were trash.”

Today’s “throwaway culture” is also reflected in frequent waste of food, he said, adding that “food that is thrown away might as well have been stolen from the table of the poor, the hungry.”

Prior to the audience, the pope made a half-hour circuit of the square in an open-topped popemobile, frequently stopping to kiss babies and small children handed to him by members of his security detail. An estimated 90,000 persons attended the audience, 20,000 more than had requested tickets, and the crowd spilled out into the avenue beyond.

Afterward, the pope spent an hour and a half greeting visiting bishops, dignitaries and ordinary pilgrims, including disabled children and adults and a group of newlyweds in their wedding attire. The pope’s embrace with a young disabled man lasted so long that an attendant gently pulled the man’s hand away.

Many in the crowd remarked on Pope Francis’ “approachable” personality and his down-to-earth appeal.

The past few popes “gave us the theology, kind of the instruction behind what our faith is about,” said Father Patrick Knippenberg, of the diocese of Victoria,Texas. Pope Francis is “kind of an exemplification of that teaching,” he said.

Contributing to this story was Clare Myers at the Vatican.

PREVIOUS: In Venezuela, shortages include bread for Communion, sacramental wine

NEXT: Help Syria, pope says; ‘where there is suffering, Christ is present’