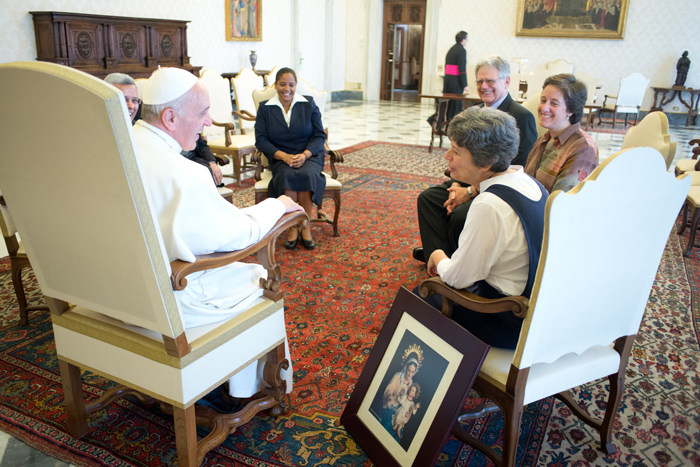 Pope Francis meets with leaders of the Latin American and Caribbean Confederation of Religious during a private audience at the Vatican June 6. (CNS photo/L'Osservatore Romano)

VATICAN CITY (CNS) — A report that Pope Francis privately acknowledged the existence of a “gay lobby” inside the Vatican offers a sensational example of his unvarnished speaking style and a reminder of the challenge that style poses for the papacy in the age of digital communications and vanishing privacy.

On the other hand, an acknowledgment that the Catholic Church’s central administration is troubled by factionalism and personal failings must be less than startling to anyone who has been following the news lately.

But the context of the headline-grabbing comment is a series of remarks most illuminating for what they reveal: not about divisions within the church, but about Pope Francis’ vision of its harmony and unity.

Pope Francis’ words to the leaders of the Latin American and Caribbean Confederation of Men and Women Religious, or CLAR, as originally reported on a website in Chile, have not been denied by anyone who was there.

A statement from CLAR — issued after the Chilean report — described the leaked account of the June 6 Vatican meeting as a “summary based on the memories of the participants” and a reliable record of the pope’s “general meaning,” though not a verbatim transcript.

Speaking to his fellow Latin American religious, the first Jesuit pope touched on some of the major points of tension that have marked relations between religious orders and the hierarchy in recent decades. He did so in a manner at once conciliatory and firm, both encouraging and sober in its assessment of the church’s problems.

He urged the religious to “put all your commitment into dialogue with the bishops,” even though “there are some (bishops) who have another idea of communion” from that held by many religious.

The pope also counseled his visitors to take a constructive attitude toward criticism and discipline from the Vatican.

“Maybe you will get a letter from the Congregation for the Doctrine (of the Faith) saying that you said this or that,” the pope reportedly said. “But don’t worry. Explain what you have to explain, but keep going.”

While affirming the reality of error and the hierarchy’s responsibility to correct it, his emphasis was on forgiveness.

Yet, Pope Francis did not hesitate to classify certain trends in the contemporary church as manifestations of ancient heresies. As an example of Gnosticism, he cited the case of an unnamed superior general of a congregation of women religious who encouraged members to “take a spiritual bath in the cosmos” in lieu of morning prayer.

Complaints about such innovations by religious orders are by now a familiar refrain from bishops, but the pope added what some might find a surprising link between doctrinal fidelity and the church’s commitment to social justice.

Expressions of “pantheism” such as the sister’s worry him, the pope is quoted as saying, “because they skip the incarnation! And the son of God was made our flesh, the word was made flesh, and in Latin America we have flesh to spare! What happens with the poor, the pains, that is our flesh … .”

The pope also drew a link between the church’s social and moral teaching by relating economic injustice and legalized abortion in an analysis that defies any division between “social justice” and “pro-life” categories of Catholicism.

“Abortion is bad, but that is clear,” he reportedly told the religious. “But behind the approval of this law, what interests are behind it … .” In an apparent reference to international organizations and private foundations that promote population control in underdeveloped countries, he added, “they are at times the conditions placed by the great groups to support with money, you know that?”

Pope Francis also offered his visitors a sort of parable about the unity of clergy and laity.

Recalling the 2007 conference of Latin American bishops in Aparecida, Brazil, which he described as a key step in a “continental mission,” he noted that the event “was not celebrated in a hotel, nor in a retreat house.”

Inside the conference rooms beneath the sanctuary of Brazil’s greatest Marian shrine, the bishops could hear the singing of the faithful overhead as “background music,” the pope said. “This made it very special.”

According to Pope Francis, contact with the faithful at Aparecida made a crucial difference in the prelates’ deliberations. He cited the case of Brazilian Cardinal Joao Braz de Aviz, then archbishop of Brasilia and now prefect of the Vatican congregation that oversees religious orders, whom the pope described as having a relatively “stiff” manner.

Then-Archbishop Braz de Aziz “went out with his miter, and the people got close to him, and they brought the children near, and he greeted them, and hugged them like this,” the pope recalled. “This same bishop then voted. He could not have voted the same way if he had been in a hotel!”

The little story is a rich and suggestive image of Pope Francis’ hopes for the flock he has been chosen to lead: a church whose leaders are not shut in with each other but surrounded by — in his words — the “people of God.”