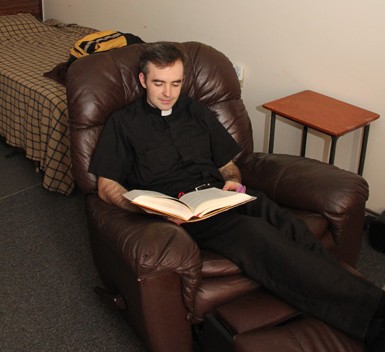 “I think the fact that the archbishop not only wants the seminary to survive, but to be renewed and strengthened, the people recognize that and it is something they can and are willing to support.”

Just how important is the annual appeal in a financial sense? Very important, Bishop Senior believes.

There are three main sources of funding for the seminary, he notes. First, as is the normal case for a college, tuition paid by the students. Second, income from the Seminary endowment. Third, fundraising, most especially the annual appeal.

(Read a related story on the whopping success of this year’s appeal.)

While at this time a majority of the seminarians at St. Charles are studying for other dioceses, each of which would have its own tuition policies, seminarians for Philadelphia in the College Division pay roughly one-third of the actual cost of their education; the balance comes from endowment income and the annual appeal.

Students in the theology division do not pay tuition. That is totally absorbed by the seminary, but they still must pay for incidentals that can add up – for example health insurance, which is a must, plus any car payments and insurance, and other everyday incidental expenses that would not be part of room and board.

“Most have to take student loans,” Bishop Senior said.

In a perfect world, the endowment income would pick up the non-tuition costs. This isn’t happening at St. Charles, according to Bishop Senior, because there was a sizable shrinkage in assets during the recent recession, coupled with a steep decline in interest rates.

“We have had to do some continuing restructuring; it’s all about being as efficient as we can be. We have to have a good formation program and not just wasting resources by taking care of buildings or subsidizing inefficiency,” said Bishop Timothy Senior.

Total dependence on endowment income can have a disastrous effect, and one has to look no further than Philadelphia’s venerable Girard College, which has survived for almost two centuries entirely through endowment funds. But it is now at a point where it has had to suspend, at least temporarily, residential living.

At St. Charles, where annual appeal funds would normally go into capital programs or plowed into the endowment, they are now being used to fund annual expenses. 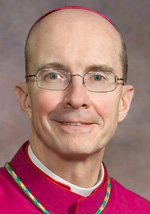 “At this point the seminary appeal provides critical funds during the fiscal year,” Bishop Senior said. “It is not the best way to ensure long-term stability because we have to deal with it every year and get it under control. We would not be able to survive without the seminary appeal.”

Raising money isn’t the entire answer. Efficient use of resources is just as important.

“We went through some difficult times with the elimination of a number of staff positions a year ago,” Bishop Senior said. “We have had to do some continuing restructuring; it’s all about being as efficient as we can be. We have to have a good formation program and not just wasting resources by taking care of buildings or subsidizing inefficiency.”

A task force that has been studying the College Division has just completed its work, Bishop Senior explained. “We will have some clarity over the next few months about what it is we are renovating for and what is going to be consolidated here (at the Theology Division).”

In addition the seminary is reinstituting the Spirituality Year that had been dropped. Formerly housed off-campus in Northampton, Pa., it will now occupy a former on-campus convent renamed Neumann Hall, Bishop Senior said.

At this point, there is not a specific plan on how the College Division property will be developed, and the archdiocese is working with the surrounding community for its input and concerns, according to Bishop Senior.

Ultimately it is all about faith, “and the enduring force of the priesthood in the life of the faith,” Bishop Senior said. “The sacraments are the center of the life of the Church.”