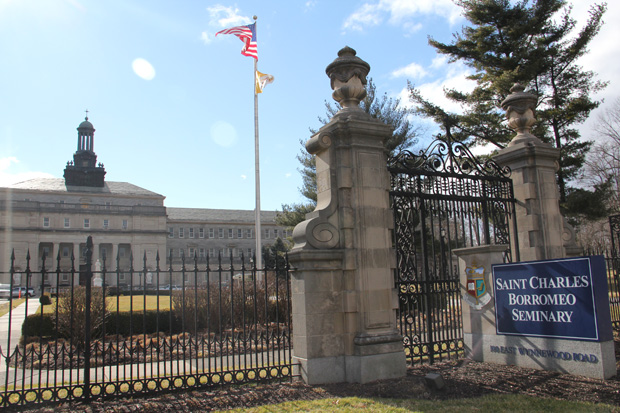 Generally speaking, if you run an annual fundraising campaign and the end result is 10 percent over the previous year, you can consider it a great success. If that’s true what would you call a 74 percent increase?

At a time when the Archdiocese of Philadelphia has issued a stunning financial report showing huge losses it is nice to be able to report something that is financially on the upswing.

The Seminary Appeal, the oldest fundraiser in the Archdiocese, traces back to 1836, just four years after the seminary was founded by Bishop Francis Patrick Kenrick. The first appeal netted $1,451.44; it has indeed come a long way.

And of course the seminary itself has come a long way. In Bishop Kenrick’s day its exclusive mission was the formation of men for the priesthood. That is still the core mission, and last year saw 139 men for the Philadelphia Archdiocese and other dioceses in formation. But there were also 100 men studying for the permanent deacon program and other men and women attending the Graduate School of Theology.

Bishop Timothy Senior, the seminary’s rector, and two seminarians celebrate Mass and explain what is happening at the seminary for groups of about a dozen guests, and after breakfast the guests are given a tour of the facilities.

“In almost every case we’ve seen the people left impressed and send a check to support the seminary,” said Msgr. Francis Beach.

In a letter of support at the outset of the drive, Archbishop Charles Chaput wrote, “Your prayerful and financial support is vital to more than the future of St. Charles Borromeo Seminary. Our archdiocesan community as a whole relies on the seminary to inspire priests, deacons, religious and laity whom we’ve come to expect in our churches, schools, hospitals and more. Generations to come will rely on the same support.”

So what explains the upswing in support?

“We’ve revamped the methodology and the Archbishop does a wonderful job in supporting the seminary,” said Msgr. Francis W. Beach, the Archbishop’s Delegate for Stewardship and Development.

Improved methods of fundraising are obvious from the results.

This year’s campaign showed an average contribution of approximately $100, a 17 percent increase over last year’s average of $84.61. That is good, but it wasn’t the real cause for the dramatic increase.

More important than individual amounts is the number of contributors. Back in the founding years of the drive, when a dollar meant a lot more than it does today, Bishop Kenrick requested a donation of one dollar from every Catholic family. Every family did not participate then and they still do not.

The big breakthrough this year was the dramatic increase in the number of individual donors. Last year’s drive counted 18,895 donors; this year there are as of now 30,499 donors, a healthy 60 percent increase.

Another program, one that builds good will and better understanding of the seminary and its needs, is the invitation to a dozen or two people who have never been to the seminary to have a first-hand experience of it, explained Msgr. Beach and Sarah Hanley, director of appeals for the archdiocesan Office for Stewardship and Development.

It starts with morning Mass, followed by breakfast with Bishop Timothy Senior, the seminary’s rector, along with two seminarians. Bishop Senior and the seminarians explain what is happening at the seminary and after the breakfast the guests are given a tour of the facilities.

“In almost every case we’ve seen the people left impressed and send a check to support the seminary,” Msgr. Beach said.

(Read a related story on how Bishop Senior is planning to strengthen the seminary’s programs, while handling its current challenges.)

Those who come to the program are usually suggested through the Seminary Development Committee, “or perhaps are active in their parishes or the Archdiocese in another way,” Hanley said.

The annual seminary drive is the most important donor revenue stream to the seminary, but there are others too. For example an April concert sponsored by the seminary’s Board of Trustees at the seminary, “The Three Irish Tenors,” attracted 450 guests and raised $340,000, according to Hanley.

“I receive endless inspiration from the wonderful young men studying for the priesthood at St. Charles Seminary,” she said. “They are truly our future Church.  Each letter we write, each workshop we run, each time we ask for support for our seminary — we are asking on their behalf. That makes this extremely rewarding work. Hopefully the passion we have is contagious.

“We reconfigured the strategy for both request and thank you letters. We also work closely with the leadership at the seminary to encourage seminarians, permanent deacons and candidates for the deaconate to speak at as many parish Masses as possible to kick off the appeal in the fall,” Hanley said.

“The commitment and generosity of the faithful to the success of the 2012-2013 Seminary Appeal has been both edifying and humbling,” said Jerry Davis, a member of the board of trustees and chair of the seminary’s Development Committee. “The key now for us however, with God’s abundant grace, is to strengthen this momentum by continuing to broaden the base of support.”

NEXT: Archbishop Chaput encourages Catholics to seek wisdom and witness to their faith