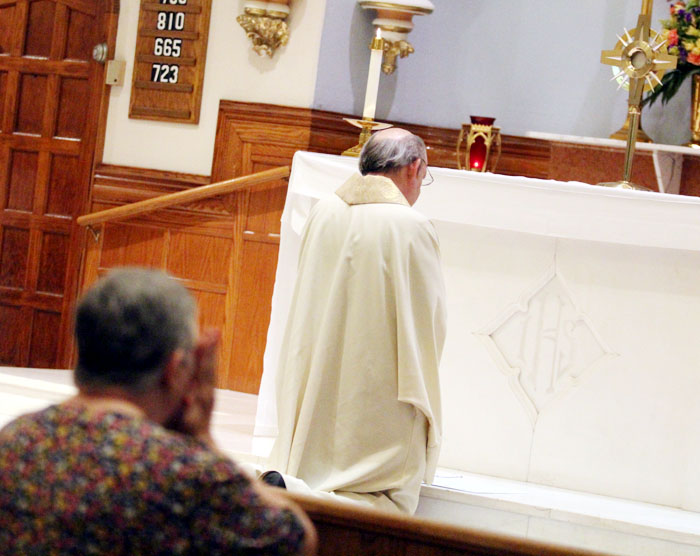 Fr. Edward Bell, pastor of Nativity BVM parish, prays along with parishioners before the Blessed Sacrament. 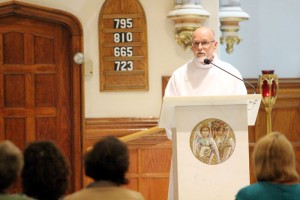 When all else seemingly fails, prayer is still the answer. At Nativity of the Blessed Virgin Mary Parish in Media, a Holy Hour for Religious Freedom was observed on the evening of Monday, July 1.

This was a parish response to this year’s Fortnight for Freedom, the June 21-July 4 period of prayer and action called for by the United States Conference of Catholic Bishops in light of what is seen as assaults on religious liberty. Chief among them is the recent U.S. Health and Human Services’ mandate requiring employers to provide birth control coverage, plus attempts to redefine marriage and other issues.

“This is great witness coming together before the Blessed Sacrament and standing up for who we are and what we believe,” said Father Edward H. Bell, pastor of Nativity. “We sat down as a parish council and decided this is what we would do. The parish decided, not me as pastor.”

The holy hour consisted of Scripture readings, periods of meditation, a reflection given by cardiologist Dr. William Kussmaul, and Benediction of the Blessed Sacrament.

Dr. Kussmaul, who is studying for the permanent diaconate, quoted from Archbishop Charles Chaput, who last year said, “Religious freedom is the cornerstone of the American experience, but threats against religious freedom are happening right now, they are indeed serious and real.”

“When you throw God out, what is next?” Dr. Kussmaul asked. “What comes after that? People begin to place their trust in a different higher power. So our national motto is rapidly becoming not ‘In God we Trust’ but ‘In Government we Trust.’

“The problem is, without God the government is liable to turn into tyranny,” he said.

Dr. Kussmaul noted, “these are not just Catholic issues.” He quoted former Governor of Arkansas Mike Huckabee, a Baptist, who in light of the Obamacare contraceptive coverage mandate, said, “Now we are all Catholics.”

In these trying times Americans should not turn to “fear, anger, frustration and despair,” Dr. Kussmaul said. “They are not Christ virtues. Instead what we need is faith and hope and love.”

“I thought his words were very inspiring I loved it and really got a lot out of it,” commented Helen Nicholson after the holy hour.

It’s not enough just to listen, believes Cindy Pyle, another parishioner at the holy hour. “We Catholics need to stand up and speak for what we believe in,” she said.

Another in attendance, Jewels Green, had something in common with Dr. Kussmaul. He (along with his wife) became Catholic 10 years ago. Green was received into the Church last year.

“I am a former abortion clinic worker, for about five years, after my own forced abortion at age 17,” Green said. “I changed my mind after learning of a surrogate mother who was paid in full to abort a baby with Down Syndrome. That led me to seeking out a faith where truth is not decided by popular vote. I ended up called to the Catholic faith.

“Now I am a pro-life speaker and editor of the American Feminist, the magazine of Feminists for Life,” she said.

Father Bell couldn’t agree more. “We just think it is important for everybody to come together on this,” he said.