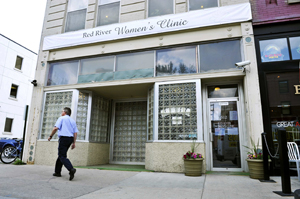 A man walks past the Red River Women’s Clinic July 2 in Fargo, N.D. A federal judge July 22 temporarily blocked North Dakota’s new abortion law, which bans ending a pregnancy once a fetal heartbeat can be detected, which can be as early as six weeks. The ruling was in response to a lawsuit filed by Red River Women’s Clinic, the only abortion clinic in the state. (CNS photo/Dan Koeck, Reuters)

BISMARCK, N.D. (CNS) — A federal judge’s temporary injunction stopping enforcement of a new North Dakota law barring abortion when a fetal heartbeat is detected “is not surprising and is typical in most legal challenges to pro-life laws,” said the North Dakota Catholic Conference.

In March, North Dakota Gov. Jack Dalrymple signed three abortion bills into law in March, one to require doctors who perform abortions to have admitting privileges at a local hospital; another to ban abortion for the purpose of sex selection or genetic abnormality; and a third to ban abortion after the detection of a fetal heartbeat, which could be as early as six weeks.

All three laws were to take effect Aug. 1.

A statement posted on the website of the state Catholic conference, which represents the bishops of Fargo and Bismarck, said the plaintiffs did not seek a temporary injunction against the prohibition on performing an abortion solely for reasons of sex selection or genetic abnormality.

“Although it is part of the clinic’s lawsuit, absent further actions, that law should go into effect Aug. 1, which would make North Dakota the first state in the nation to protect unborn children with disabilities,” the statement said.

The Red River Women’s Clinic also plans to challenge the requirement its doctors have admitting privileges at a hospital.

In March, when lawmakers passed the three abortion bills, Bishop David D. Kagan of Bismarck said their actions “affirmed our state’s commitment to the protection of all human life.”

North Dakota lawmakers also voted March 22 to put a referendum on the 2014 ballot that would amend the state constitution to say that “the inalienable right to life of every human being at any stage of development must be recognized and protected.”

Earlier in July, a state judge said a 2011 North Dakota law prohibiting one of the two drugs used for nonsurgical abortions violates the state and U.S. constitutions.

Bishop Kagan and Bishop John T. Folda of Fargo said in a statement that with his ruling, Corwin recognized a right to abortion in the state constitution “more expansive than that recognized by the U.S. Supreme Court.”

“A lone judge sitting in Fargo has declared that the North Dakota Constitution makes abortion a ‘fundamental’ right subject to practically no limitations,” the bishops said July 16. “In fact, the right ‘found’ by … Corwin is more expansive than that used by the U.S. Supreme Court.”

“As a result, the opinion could put all of the state’s laws on abortion in jeopardy, including its parental consent laws, health and safety requirements, and conscience protection,” they said.

NEXT: Catholics, Pentecostals share belief in ‘healing power of Jesus’