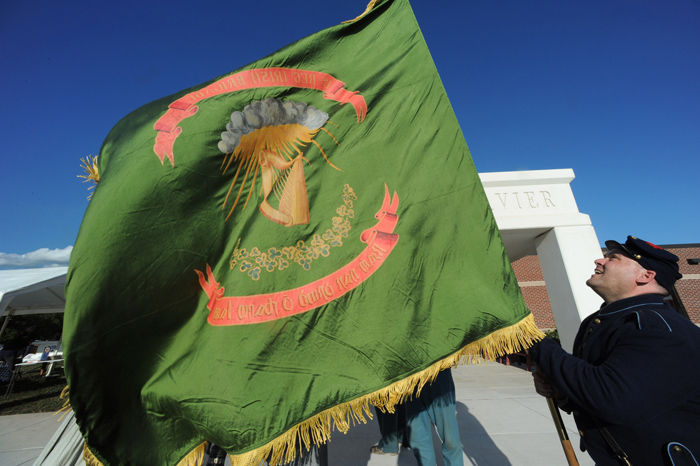 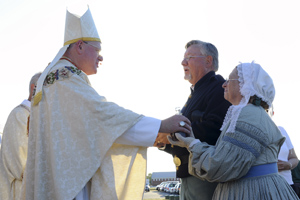 GETTYSBURG, Pa. (CNS) — Celebrating Mass just a few miles from the hallowed grounds of its Civil War battlefields, New York Cardinal Timothy M. Dolan called Gettysburg “a shrine and a sanctuary” to which pilgrims journey with “a deep sense of honor, awe, reverence, patriotism and gratitude.”

Cardinal Dolan, who is president of the U.S. Conference of Catholic Bishops, celebrated the outdoor Mass July 6 on the grounds of Xavier Center, home to the parish center and parochial school of St. Francis Xavier Parish in the Diocese of Harrisburg.

He arrived to a crowd of people eager to shake his hand or receive a blessing, and took time before and after Mass to greet everyone who wished to have a moment with him.

The affable cardinal expressed genuine respect for the sacredness of Gettysburg, saying, “It is not an exaggeration to call Gettysburg a shrine and a sanctuary.”

He eagerly displayed his pectoral cross, which once belonged to Archbishop John Hughes, the first archbishop of New York and a close friend of Abraham Lincoln. And he drew laughter when he told the crowd gathered for the Mass that being in Gettysburg was “better than being at Yankee Stadium.”

In his homily, he interlaced the Mass’ readings with the abundance of history and imagery that pours forth from Gettysburg’s battlefields.

St. Paul’s Letter to the Galatians — in Chapter 6, Verses 14 to 18 — points to Christ’s cross and his holy wounds, “concepts too readily clear as we close our eyes and reverently and somberly recall the tens of thousands of men killed and wounded on these very acres, ever cardinal red in our national memory,” the cardinal said.

The Battle of Gettysburg, often called the “high water mark of the rebellion,” pitted Gen. Robert E. Lee’s Army of Northern Virginia against the Union Army of the Potomac under the command of Maj. Gen. George Meade. The Union pushed Lee to retreat to Virginia and stemmed the tide of the Confederacy’s invasion of the North.

During the battle, which took place July 1-3, 1863, St. Francis Xavier Church served as a hospital for both Union and Confederate soldiers. Here, religious sisters, most notably Sisters of Charity and Daughters of Charity, tended to the wounded and the dying.

(Read more about Catholics’ role in the battle, and their connections to Philadelphia, here.)

The role of St. Francis Xavier Church — dedicated in 1853 by Bishop John Neumann — during the battle is a constant reminder of the sacrifices of so many men and women, noted Father Bernardo Pistone, pastor.

He pointed to the missal stand used for the commemorative Mass, noting that it was “carved from the wood of our old pews that served as cots for the soldiers who were being nursed at the historic church.”

The stand was given to the Basilica of the National Shrine of the Immaculate Conception in Washington in the late 1920s to be placed in the Chapel of St. Brigid, dedicated to the 12 religious orders who cared for the soldiers during and after the battle.

Among those who presented the gifts of bread and wine to Cardinal Dolan during the anniversary Mass were religious sisters representing Sisters of Charity and Daughters of Charity.

“Our pilgrimage to Gettysburg is all about memory,” the cardinal told the congregation of nearly 1,000 people. Among them were parishioners from St. Francis Xavier and from the Diocese of Harrisburg, Civil War re-enactors and history enthusiasts from across the country.

Cardinal Dolan remembered the soldiers, “whose Blue or Gray were insignificant to a God who cries at every war as he watches his children, destined to love, only hurt and harm one another. Both read the same Bible. Both prayed to the same God. And each invoked His name against the other.”

He spoke of the memory of the Catholic sisters, “binding up the nation’s wounds on both sides, unconcerned whether they came from North or South,” and of Father William Corby, the chaplain of the Irish Brigade, “absolving his men of their sins as they ran toward near-certain fall.”

And the cardinal spoke of the memory of “a president aptly named Abraham,” who christened the acres of battlefields “with references such as ‘a new nation conceived in liberty,’ ‘all men are created equal,’ and ‘this one nation under God.'”

“Every person, every people, needs both memories and dreams,” Cardinal Dolan said. “This battlefield stirs up both as we assemble in obedience to the command Jesus himself gave us on the very eve before he endured his own Gettysburg, his Gethsemane, his Golgotha: ‘Do this in memory of me.'”

Reed is managing editor of The Catholic Witness, newspaper of the Diocese of Harrisburg, Pa.