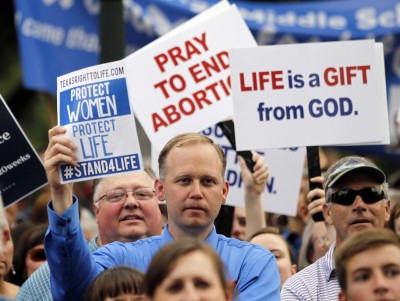 Protesters hold signs during an anti-abortion rally at the Texas Capitol in Austin July 8 as the Legislature continued to debate in special session a measure that would ban abortions after 20 weeks of gestation and place new restrictions on abortion providers. (CNS photo/Mike Stone, Reuters) 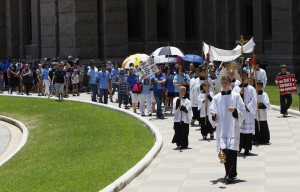 Pro-life supporters participate in a procession in Austin, Texas, July 9 as the Legislature meets to consider a bill to restrict abortion. (CNS photo/Mike Stone, Reuters)

UPDATED — AUSTIN, Texas (CNS) — The drama in Texas over abortion that drew national and international attention came to an end for the moment after the state House of Representatives then the state Senate voted to adopt tougher abortion regulations.

Gov. Rick Perry signed the measure into law during a ceremony July 17.

The law prohibits abortions in the 20th week of pregnancy, requires abortion clinics to be certified as surgical centers and increases regulations on doctors and abortion-inducing drugs.

Jeff Patterson, executive director of the Texas Catholic Conference, said the law protects life by requiring no termination of pregnancies after the first 20 weeks and it improves standards for abortion facilities.

The conference is the statewide association of the Catholic dioceses in Texas and the public policy arm of the conference’s board of directors — the bishops — that represents Catholic positions on issues before the Texas Legislature, the Texas delegation in Congress and state agencies.

“Twenty weeks is five months — that’s late term and a point where babies can feel pain,” Patterson said. “The higher standards for abortion clinics are in case there are complications or problems that occur when providing abortions.”

The stricter regulations for doctors and on use of abortion-inducing drugs such as RU-486 are to ensure they follow Food and Drug Administration guidelines.

“A lot of doctors don’t follow the prescription guidelines,” Patterson said. “It means two separate visits, but that’s to make sure there are no problems.”

The measure also requires that doctors performing abortions have hospital privileges within 30 miles of the facility in which the abortion is performed. “About 20 percent of the time there are complications,” Patterson said. “In case there’s a problem they can get the woman to a hospital to care for her.”

According to the Texas Department of Health, there were five deaths out of 937,818 abortions performed between 2000 and 2011. The last time a woman died from an abortion complication was in 2008.

For pro-life groups, the legislation is another incremental step in ending abortion. In 2011, Texas legislators passed a bill requiring a woman seeking an abortion to receive a sonogram from the doctor who is to perform the procedure at least 24 hours before the abortion.

This year’s legislation garnered national and international attention during a filibuster by Democratic State Sen. Wendy Davis of Fort Worth June 26, the last day of the first special session, thus killing the proposed bill.

Perry then called a second special session and added abortion to the agenda. The Texas Constitution calls for the Legislature to meet biennially in odd-numbered years for 140 days beginning the Tuesday after the first Monday in January. Under the Constitution, the governor can separately call special sessions on subjects of his choice that may last up to 30 days.

After a series of delays allowed Davis to engage in a filibuster in the waning hours of the session, the measure died despite clear majority support. Perry called a second special session and again added the abortion legislation as an agenda item.

Marie Seale, director of the Diocese of Austin’s Office of Pro-Life Activities and Chaste Living, said the filibuster got the attention of pro-life supporters and brought them out to the Capitol in large numbers for the second special session.

“People were wildly upset about what Wendy Davis did to legislation in the first special session,” she said. “When pro-lifers saw the vote being taken from them, they riled up.”

Seale said that pro-life supporters realized their presence was needed in large numbers and they were moved to take action.

“It means being inconvenienced, packing lunches and getting at line early in the morning,” she told the Catholic Spirit, newspaper of the Austin Diocese. “That’s what really what Christian life is supposed to be: a call to action.”

Although the church, the Texas Catholic Conference and other pro-life groups regularly ask people to make their presence known, this was a grass-roots effort to get as many pro-life supporters to the Capitol as possible. Laypeople got on Facebook and called on friends and other pro-life people they knew to show up dressed in blue at the Capitol.

The challenge is now to keep the momentum going and Seale said the events made her realize how much work her office has to do.

“Many women came forth with post-abortion stories,” she said. “They felt called to share how abortion affected them. That means Project Rachel has to grow. I’m hoping to pull people who are now on fire and get them involved.” Project Rachel is a diocesan pro-life ministry for those who are suffering from the spiritual and emotional trauma of abortion.

Seale said the Gabriel Project, a diocesan ministry for women in crisis pregnancies, also will need to grow to meet the needs of the mothers and their babies.

She said that many pro-life people who had not been politically active before now realize the challenge of getting legislation passed. The next legislative session is in 2015, and Patterson said pro-life groups want an end to judicial bypass, which allows girls under age 17 to forgo parental consent for abortions by getting approval from a district judge.

Pro-life groups also want expansion and funding of crisis pregnancy centers and an end to regulatory requirements that prevent the centers from providing options other than abortion, as well as social services that will allow a woman to keep her child.

Obregon writes for the Catholic Spirit, newspaper of the Diocese of Austin, Texas.

NEXT: New coalition aims to protect right to religious expression in military