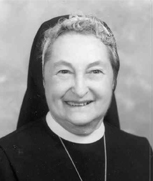 From 1981 to 1997 Sister Frances assisted in the libraries at St. Ephrem School, Bensalem; St. Cecilia School, Philadelphia and Holy Saviour School, Norristown. In 1997 she was assigned to Camilla Hall where her ministry was the apostolate of prayer.

The funeral Mass was celebrated June 27 at Camilla Hall. Father William Dean was the celebrant and homilist. Interment followed in the Immaculata Cemetery.

In addition to the members of her religious community, Sister Frances is survived by a niece and nephews, grandnieces, and grandnephews. She was predeceased by her parents, Valeriano and Angelina DeCerchio Berardocco and her siblings, Vincent, Albert and Rudolph Berardocco.

PREVIOUS: Father Peter E. Campbell, member of the Missionaries of the Sacred Heart and author

NEXT: Deacon Harper of St. Athanasius Parish dies at 67, known for spirituality, service