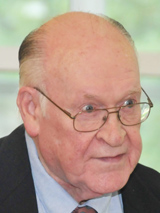 Brother Edward was born in Baltimore on Feb. 7, 1929, and graduated from Loyola College in 1949 with a degree in English. At age 21, he joined the Brothers of the Christian Schools, the teaching order that operates La Salle University.

He earned master’s degrees in theology and education from La Salle and Loyola, respectively, in 1955. He earned a doctorate in theology from Catholic University in 1970. He also completed advanced study and field work in archaeology at Hebrew Union College in Jerusalem and in Greek and Hebrew at Princeton Theological Seminary.

“Brother Edward Davis was, throughout his long La Salle career, a superb teacher of Sacred Scripture, especially of the New Testament,” said La Salle University President Brother Michael J. McGinniss, F.S.C. “His classes were always in demand, because he knew how to use his wit and broad knowledge to make Scripture come alive in the classroom for students, most of whom were not destined to follow his career as scholars of Scripture, but who would go on to be faithful believers and participants in their churches.”

After completing his studies at the brothers’ scholasticate in Elkins Park, Brother Edward taught there for three years.

He returned to La Salle in 1967 and served as the director of the graduate religion program from 1967 to 1974. He then served as chair of the Religion Department from 1978 to 1982. He also spent a year as a lecturer in divinity at Christ’s College of the University of Liverpool, England, in the early 1970s.

“In the 1960s and 1970s, after the Second Vatican Council, Brother Edward made a great impact on the Catholic community in our region as Director of the Graduate Religion Education and Theology Master’s Program,” Brother Michael said. “Countless religious women and men carried the lessons they learned in La Salle’s graduate program into religion and catechetic classes all along the East Coast and beyond. La Salle, his students, the Christian Brothers, and the broader Catholic community owe much to this great man.”

“He was a man of extraordinary intellect and very dedicated to what he was doing in service of the students,” said Msgr. Joseph Devlin, a professor of religion at La Salle. “I will miss him.”

Msgr. Devlin said Brother Edward possessed a lively sense of humor both in and out of the classroom.

Devlin recalled meeting a La Salle alumna who, “as soon as I brought his name up,” said, “I still remember his wit and his teaching.”

Brother Edward received the Lindback Award for Distinguished Teaching in 1985.

In an interview published in the 1979 La Salle yearbook, Brother Edward said he challenged his students “to do things that are really beneficial.” In the same interview, he said, “We’re not out to produce well-rounded students, but students with sharp edges.”

Richard Van Fossen, a 1988 La Salle graduate who majored in history and education, took a course on the Gospel of John with Brother Edward.

“I took that course because it was the Gospel I was least familiar with,” said Van Fossen. “He was amazing — he’d go over it line by line and illuminated it beautifully.”

In the 1980s Brother Edward and fellow Christian Brother Joseph Keenan traveled throughout the Middle East and Asia — places where much of what they taught had occurred.

“How can you teach the Bible if you don’t go to Jerusalem?” Brother Edward asked a colleague.

Brother Edward retired in 1995 and lived at St. Mary’s, a Christian Brothers’ community in Philadelphia’s West Mount Airy section that he helped found.

At a luncheon for retired La Salle faculty and staff in 2012, Brother Edward gave the invocation.

“We of the La Salle University of the past are gathered here today for companionship, sharing old and new times, firm in our friendship,” he said. “But the important time is the future. Let those of us who lived almost all of our academic lives without a computer or a cell phone or an iPad happily hand over to La Salle the generation that has never lived without them.”