VATICAN CITY (CNS) — The director and the deputy director of the Vatican bank, which is being investigated by a special papal commission, resigned July 1.

A statement from the Vatican press office said Director Paolo Cipriani and Massimo Tulli, deputy director, offered their resignations “in the best interest of the institute and the Holy See.” The bank has been working to revamp a marred image of secrecy and scandal with greater transparency. 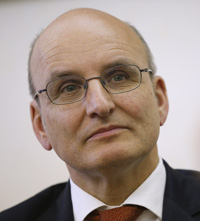 Ernst von Freyberg, who has assumed the function of interim general director of the Vatican bank, listens to a question during an interview in his office at the Vatican June 10. (CNS photo/Tony Gentile, Reuters)

Von Freyberg thanked Cipriani and Tulli for their service to the bank, formally known as the Institute for the Works of Religion, or IOR in Italian.

“Since 2010, the IOR and its management have been working hard to bring structures and processes in line with international standards for anti-money laundering,” he said. “While we are grateful for what has been achieved, it is clear today that we need new leadership to increase the pace of this transformation process. Our progress is in no small measure due to the continued support from the governing bodies of the Institute and its personnel.”

The Vatican said Rolando Marranci, formerly chief operating officer at a leading Italian bank in London, would serve as acting deputy director. It said Antonio Montaresi, who has served as chief risk and chief compliance officer with various banks in the United States, would serve in the newly created position as acting chief risk officer, overseeing compliance and special projects.

The resignations came five days after the Vatican announced that Pope Francis had established a five-member commission to review the mission and activities of the Vatican bank. The commission, which has already begun its work, is part of the pope’s larger efforts to reform the central offices of the church, said a June 26 Vatican statement.

Von Freyberg, a German industrialist, was appointed president of the bank in February. In May, he told reporters in May that he was surprised to find so few problems in the bank’s operations, which convinced him that the biggest problem the bank faces is its reputation.

PREVIOUS: Vatican to cooperate in investigation of monsignor arrested for fraud