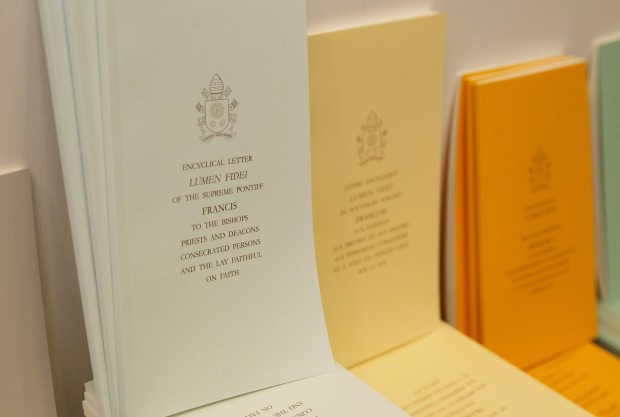 VATICAN CITY (CNS) — Presenting Pope Francis’ new encyclical and acknowledging how much of it was prepared by retired Pope Benedict XVI, top Vatican officials hailed it as a unique expression of the development of papal teaching and unity in faith.

“It is a fortunate coincidence that this text was written, so to speak, by the hands of two popes,” said Archbishop Gerhard Muller, prefect of the Congregation for the Doctrine of the Faith, at a news conference July 5 marking the release of “Lumen Fidei” (“The Light of Faith”).

“Notwithstanding the differences of style, sensibility and accent, anyone who reads this encyclical will immediately note the substantial continuity of the message of Pope Francis with the teaching of Pope Benedict XVI,” the archbishop said.

Archbishop Muller, along with Cardinal Marc Ouellet, prefect of the Congregation for Bishops, and Archbishop Rino Fisichella, president of the Pontifical Commission for Promoting New Evangelization, emphasized not only the collaboration of the two popes, but their shared view of faith as a “common good,” a gift that is transmitted and nourished by the church, but is meant to be shared with all humanity.

Christians have an obligation, they said, to help others by proclaiming the Gospel, but also by living their faith in order to transform the world into a place of authentic brotherhood and care for the weakest.

Cardinal Ouellet told reporters, “A pillar was lacking in Benedict XVI’s trilogy on the theological virtues” begun with his encyclicals on love and on hope. “Providence willed that this missing pillar should be both a gift from the pope emeritus to his successor and a symbol of unity.”

Pope Francis’ decision to take up the work begun by Pope Benedict and add some of his own reflections, which he states explicitly in the encyclical, witnesses to their unity in faith, the Canadian cardinal said. “The light of faith is passed from one pontiff to another like a baton in a relay, thanks to ‘the gift of the apostolic succession.'”

For Cardinal Ouellet, the encyclical’s “shared mode of transmission illustrates in an extraordinary way the most fundamental and original aspect of the encyclical: its development of the dimension of communion in faith,” of the importance of believing in and with the church and of living one’s faith in solidarity with others.

The text of the finished encyclical, he said, reflects “much of Pope Benedict and all of Pope Francis.”

Archbishop Muller added, “This is not a patchwork encyclical.”

Archbishop Fisichella said Pope Benedict “was not convinced he had to undertake the effort” of writing an encyclical on faith, but so many people insisted that he decided to write it and offer it to the church at the end of the Year of Faith, which concludes in November.

“History had another idea,” the archbishop said. 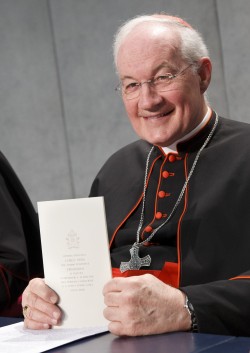 Canadian Cardinal Marc Ouellet, prefect of the Congregation for Bishops, holds a copy of Pope Francis’ first encyclical, “Lumen Fidei” (“The Light of Faith”), during a news conference for its release at the Vatican July 5. (CNS photo/Paul Haring)

Archbishop Fisichella said that while there are obvious echoes of Pope Benedict’s teaching in the document, “it is fully the text of Pope Francis” as seen in “the immediacy of the expressions used, the richness of the images to which he refers and the particularity of some of the citations of ancient and modern authors.”

He said that, like the first encyclical of any pope, one can get from the text an idea of what will be the main emphases of Pope Francis’ pontificate. In fact, he said, the encyclical repeatedly uses the three verbs the pope used in his homily at Mass with cardinals the morning after his election: “Walk, build, confess.”

Archbishop Muller said that in the encyclical, and particularly “in the meditations that he offers us by way of his daily homilies, Pope Francis often reminds us that ‘all is grace.’ This affirmation, which in the face of all the complexities and contradictions of life might seem naive or abstract, is in fact an invitation to recognize the ultimate goodness of reality.”

“This is the purpose of the encyclical letter ‘Lumen Fidei,'” he said. “The light that comes from faith, from the revelation of God in Jesus Christ and in his Spirit, illuminates the depths of reality and helps us to recognize that reality bears within itself the indelible signs that the work of God is good.”

Cardinal Ouellet told reporters, “The encyclical presents the Christian faith as a light that comes from listening to the Word of God in history. It is a light that allows us to see the love of God at work, establishing his covenant with humankind.”

Pope Francis teaches that the light of faith “offers us human beings a hope that gives us the courage to journey together toward a future of full communion,” he said.

NEXT: ‘Lumen Fidei’ at a glance