Pope commissions young people to be missionaries without borders 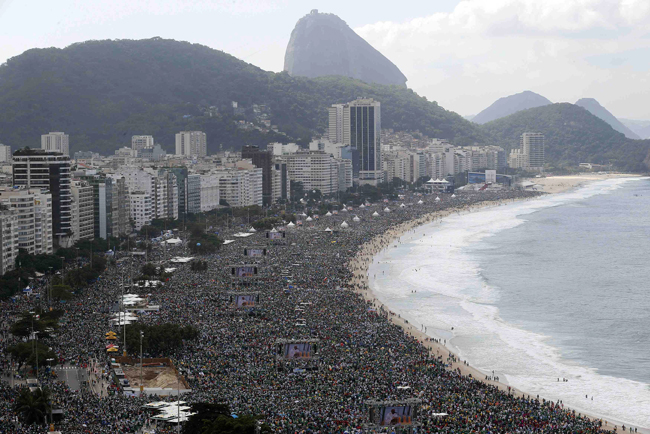 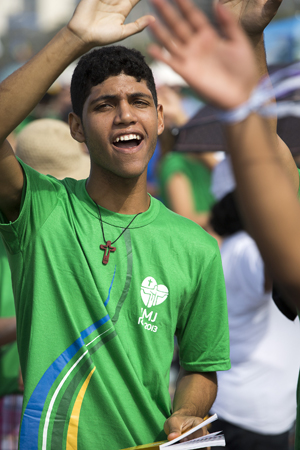 RIO DE JANEIRO (CNS) — Pope Francis commissioned some 3 million young people to join forces and form what could be called Missionaries Without Borders.

“Where does Jesus send us?” he asked World Youth Day pilgrims July 28. “There are no borders, no limits: He sends us to everyone.”

On the white sand of Copacabana beach — under partly sunny skies, a relief after days of rain in Rio — Pope Francis celebrated the closing Mass for the July 23-28 celebration of World Youth Day Rio.

Although retired Pope Benedict XVI had chosen the theme for the gathering — “Go and make disciples of all nations” — it was tailor-made for Pope Francis, who continually tells Catholics: “Go out. Go forward. Keep going.”

“Sharing the experience of faith, bearing witness to the faith, proclaiming the Gospel: this is a command that the Lord entrusts to the whole church and that includes you,” he told his beachfront congregation, which included hundreds of thousands who had spent the night on the sand, sleeping or not.

Long journeys, days of rain and sometimes improvised accommodations did not dampen the spirits of the World Youth Day participants, and Pope Francis told them that if they did not share their experience of God’s love with others it would be “like withholding oxygen from a flame that was burning strongly.”

Jesus did not tell his disciples to share the Gospel “if you would like to, if you have the time,” the pope said. Instead, he commanded them to proclaim the Good News to the world.

Sharing the love and mercy of God and the salvation offered by Christ through the church “is born not from a desire for domination or power, but from the force of love,” the pope told the young pilgrims, who were joined on the beach by tens of thousands of Rio residents and other Latin Americans, including Brazilian President Dilma Rousseff, Argentine President Cristina Fernandez de Kirchner, Bolivian President Evo Morales and Suriname’s President Desi Bouterse.

But even more special guests were present: The pope invited a couple and their baby girl, who has anencephaly (missing part of her brain), to come forward during the offertory. Pope Francis met the family July 27 as he was leaving Rio’s St. Sebastian Cathedral and invited them to participate in the Mass. Under Brazil’s abortion laws, the couple would have been able to abort the child, but chose not to.

With the father carrying the baby, the parents walked up to the pope wearing shirts with a Portuguese message on the back: “Stop abortion.”

In his homily, Pope Francis told the young people that evangelizing requires a personal witness of love for God and love for others, especially the weak, the poor and the defenseless.

When the psalm says “Sing a new song to the Lord,” he said, it is not talking about a certain set of lyrics or a specific melody, rather “it is allowing our life to be identified with that of Jesus; it is sharing his sentiments, his thoughts (and) his actions.”

“The life of Jesus is a life for others,” the pope said. “It is a life of service.”

The pope did not mince words with his young audience, telling them: “Evangelizing means bearing personal witness to the love of God, it is overcoming our selfishness, it is serving by bending down to wash the feet of our brethren, as Jesus did.”

Pope Francis said he knows how daunting it can be to recognize that each Christian bears personal responsibility for sharing the Gospel with his or her actions and words, but Jesus told the first disciples and tells disciples today, “Be not afraid.”

“Jesus does not leave us alone; he never leaves you alone,” the pope said.

And the church does not leave any of its members, or even small groups, to go it alone, he said. “Jesus did not say: ‘One of you go,’ but ‘All of you go.’ We are sent together.”

“Be creative. Be audacious,” he said. “Do not be afraid.”

Pope Francis thanked the hundreds of bishops and thousands of priests who accompanied their young pilgrims to Rio, but told them the pilgrimage was just one step on the young people’s journey of faith.

“Continue to accompany them with generosity and joy, help them to become actively engaged in the church; never let them feel alone,” he said.

He gave the younger generation a final instruction, “As you return to your homes, do not be afraid to be generous with Christ, to bear witness to his Gospel.”

It can change the world, he said. “Bringing the Gospel is bringing God’s power to pluck up and break down evil and violence, to destroy and overthrow the barriers of selfishness, intolerance and hatred.” 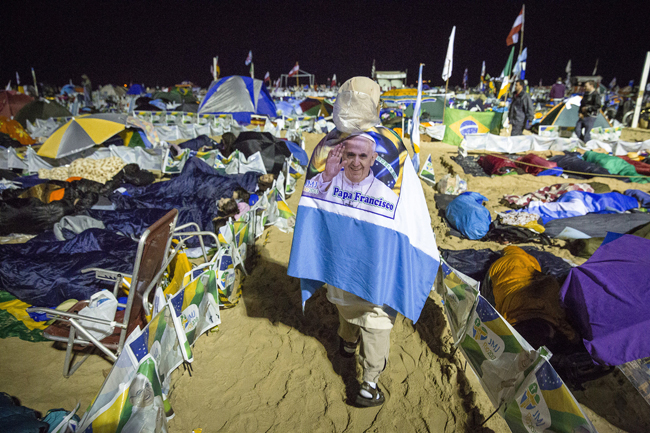 NEXT: Vatican to cooperate with Italy in fight against financial crimes