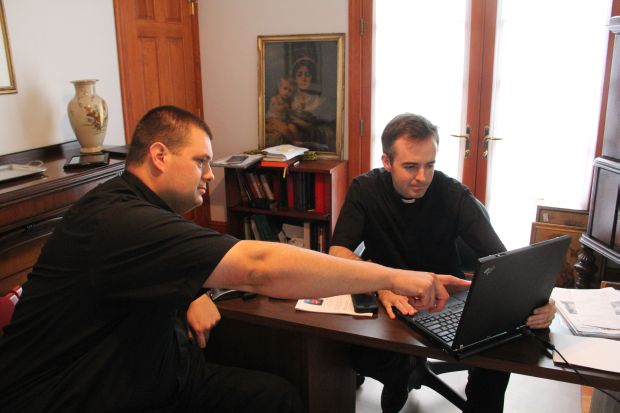 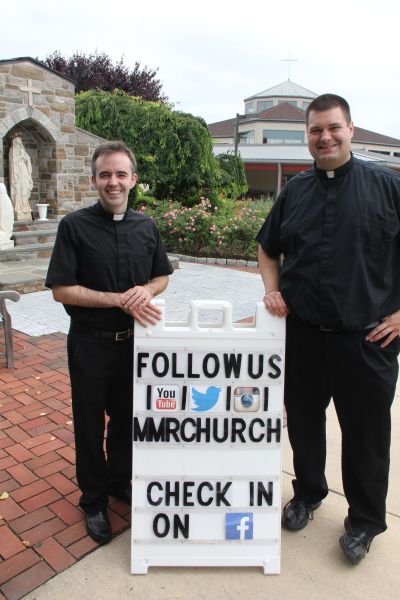 Deacon Buck (left) and Father Whittingham promote Mary, Mother of the Redeemer Parish’s efforts to reach out to people through social media.

“When I was your age, we actually spoke to one another.”

Statements spotlighting generation gaps often begin with “When I was your age …” and one defining characteristic of the younger generations in the 21st century is their seemingly instinctual attraction to social media communications, which can leave persons in older generations scrambling to keep up.

In every age proclaiming the Gospel faces challenges, and especially so in this era of technology when so many things are competing for our attention — from the time we wake in the morning until we shut our eyes in sleep at night.

The Catholic Church sees the imperative of employing every technology to reach out to the young and the young at heart. At the parish level, it is up to the priests, deacons, religious and lay members to utilize social media outlets such as Facebook, Twitter and Instagram in order to broaden their outreach efforts.

At Mary, Mother of the Redeemer Parish in North Wales, Montgomery County, parochial vicar Father Thomas P. Whittingham, who was ordained in 2012, is leading the charge.

“I grew up living in that sphere, and it’s what drives people my age,” Father Whittingham said of social media. Since his graduate school days, it is how he always communicated.

“We should be very concerned for young people, because the Internet and social media sites are where they access undesirable messages and materials, and they get so full of those things that there’s no room left for Christ,” he said.

Mary, Mother of the Redeemer Parish consists of more than 3,600 families, making it one of the Archdiocese of Philadelphia’s largest parishes, and the parish’s Facebook page helps keep parishioners informed. Among the items offered are the opening prayers for Sunday Masses, inspirational quotes from saints and scriptures, and recent Church news topics (such as the identity of a Missouri priest who stopped at an accident scene to anoint an injured motorist).

Parish committees also use the parish Facebook page and Twitter account to inform interested members of activities, such as the parish family movie night, rosary walks and book discussions sponsored by the youth ministry team.

“The parish bulletin can’t be the only source of communication any more,” said Maria Stumpf, the director of parish services at Mary, Mother of the Redeemer.

While not as familiar with Facebook and Twitter, she sees to it that the substance of the parish website is always being improved and engaging. “It has to be fresh, with real content for the benefit of our parishioners,” she said.

In addition, Stumpf also sends out a weekly email titled “MMR News of the Week.”

Father Whittingham and transitional Deacon Jason Buck also use their own personal Facebook pages to share parish information and activities.

On Wednesdays, Deacon Buck lightens the mood by sharing a popular auto insurance “Hump Day” advertisement featuring a dromedary camel. But for the most part, he shares posts promoting vocations awareness and also videos for unique parish groups such as the MMR St. Francis Ecology Council, who recruit parishioners to help keep the vast parish grounds green and fragrant. 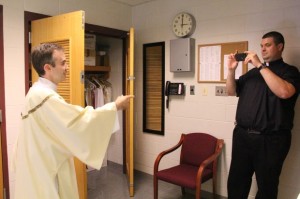 Father Whittingham records a video catechesis by Deacon Buck in the church sacristy.

Twitter and Facebook are also vital tools of communication for the community of St. Raymond of Penafort Parish, located in the Mount Airy section of Philadelphia.

“We must use every way possible to connect with people where they are,” said Father Christopher M. Walsh, pastor of St. Raymond’s.

Outreach efforts include a podcast recording of Sunday Mass on the parish website that is available to homebound parishioners, those who don’t attend Mass on a regular basis and for prospective members to witness the faith community before coming in person.

The parish has many baptisms and also many adults in R.C.I.A., and using social media allows Father Walsh and the parish staff to keep everyone informed. The parish Facebook page announces special Mass times, such as Holy Week liturgies, and also serves as a means to create an alumni association for St. Raymond School, which is still in operation.

As the use of electronic communications continues to grow in popularity, the Church increasingly is using them to reach the world’s Catholics.

Many bishops and archbishops, including Archbishop Charles Chaput, have official Facebook pages to keep their faithful informed and inspired, and Twitter has been utilized by Pope Benedict XVI and Pope Francis to spread the Gospel throughout the world.

Some estimates count users of Facebook and Twitter – just to name two among the many social media sites – at around one and a half billion people.

The unprecedented capability of social media to reach those people with the good news of the Gospel presents challenges for the Church to be seen and heard in a fast-paced, media-saturated culture.

But social media also opens up a new opportunity for evangelization, and some Catholic parishes — their leaders together with their members – are making the most it.

PREVIOUS: Local Catholics asked to take a hike on autumn pilgrimage to Cathedral