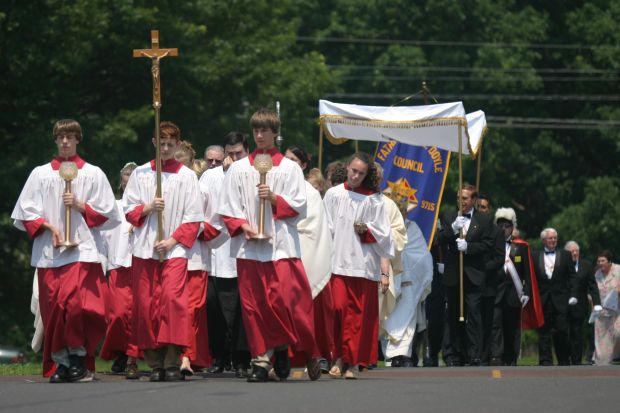 This fall it will be time to lace up some comfortable shoes and start stretching, because on Sunday, Oct. 13 the Archdiocese of Philadelphia will host a Pilgrimage of Faith to the Cathedral Basilica of SS. Peter and Paul in celebration of the Year of Faith.

Parishes from all over the Archdiocese are expected to participate, either by walking to the center city cathedral or taking transportation.

Parishes are expected to organize in groups that will take buses to one of several designated departure sites, from which they will walk to the cathedral.

“We set up seven landing sites that are within walking distance,” said Meghan Cokeley, director of the archdiocesan Office for the New Evangelization which is coordinating the event.

Some of these sites are close to the cathedral, such as St. Francis Xavier Church at 2319 Green Street — a 20-minute walk over 1.4 miles — or St. Agatha-St. James, about two miles away in West Philadelphia.

(See a complete list of sites, distance from the cathedral and information about liturgies here.)

About 150 seminarians will be walking from St. Charles Borromeo Seminary in Wynnewood, Montgomery County – over six miles away.

Participants may also “walk, drive, take the train, or any combination that will get you here,” Cokeley said.

Complimentary refreshments will be provided at the cathedral by Williamson Hospitality prior to the Mass. Organizers hope to fill the cathedral pews, which have a capacity of about 1,200.

Already, high schools and colleges throughout the greater Philadelphia region are preparing their pitches to get students excited to attend the event.

Ed Lawrence, a teacher at Archbishop Ryan High School in Northeast Philadelphia, is working with Carol Carey, superintendent for archdiocesan secondary schools, to promote the pilgrimage from day one of the new school year.

“I would love to see as many people participate in the pilgrimage as possible,” Lawrence said. “These are rare opportunities to deepen our faith. And quite frankly, that’s what we’re here for: to deepen our relationship with God.”

Lawrence hopes students get into the spirit of the pilgrimage, seeing a way to meet young people from other parishes in the archdiocese and to form a better appreciation for their own parishes.

With 40 years of teaching experience under his belt, Lawrence knows a pilgrimage can offer youths a few lessons that can’t be learned in a classroom.

This Year of Faith, declared by Pope Benedict XVI and carried on by Pope Francis, encourages Catholics to help reinvigorate the practice of the Catholic faith around the world.

“One of the big causes and the graces of the year of faith is public witness,” Cokeley said. “And so one of the real thrusts from both Pope Benedict and Pope Francis during the Year of Faith has been this call to get the faith out to the public square. The Year of Faith really is that opportunity.”

These efforts by the Church to rally Catholics are an expression of the  New Evangelization. The movement proposed by popes since the Second Vatican Council urges Catholics to renew their practice of the faith and spread the gospel to others.
New Evangelization is a response to the rise of secularism in Western countries, where Church attendance and the number of practicing Catholics is on the decline.

While participation in religious pilgrimages is a fairly new concept in the eastern United States, the Hispanic community is no stranger to the long walk.

Hispanic Catholics are expected to join in the pilgrimage, and Mass will be celebrated in Spanish in the upper church at Visitation B.V.M. Parish in Philadelphia’s Kensington section prior to the start of the pilgrimage.

The archdiocese hopes the walking pilgrimage will be a great success, taking comfort in the fact that this year’s World Youth Day was a hit with the younger crowd.

“There’s a special grace in (making a) pilgrimage,” Cokeley said. “It gets you out of your comfort zone which is exactly when God can change you, when you are asked to do something not in the ordinary way of things. So when the Church calls for pilgrimages it’s because there are special graces that God wants to give and that will bring something new for your life. That’s why she (the church) has these traditions of pilgrimage.”

Onix Perez-Mas is a student at La Salle University and an intern at CatholicPhilly.com.

PREVIOUS: Pilgrimage of Faith sets up sites to organize walk to cathedral