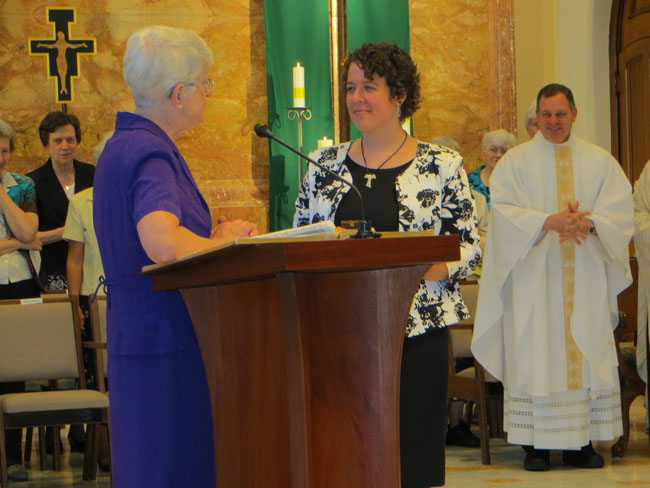 Sister Esther Anderson, at left, congregational minister, welcomes Sister Sara Marks into the congregation as a Sister of St. Francis Aug. 11 at the order’s motherhouse in Aston. Father Samuel Verruni, who concelebrated the Mass that included Sister Sara's profession of vows, is at right.

Sister Sara Marks professed her first vows as a Sister of St. Francis of Philadelphia Aug. 11. The profession took place during a Mass at Our Lady of Angels Convent, the congregation’s motherhouse in Aston.

Sounds of joy filled the chapel as Sister Esther Anderson, congregational minister, welcomed Sister Sara into the congregation and gave her copies of the “Third Order Regular Rule of St. Francis” and of the “Constitutions and Directives of the Sisters of St. Francis of Philadelphia” as well as a beautiful San Damiano crucifix.

“I was once told by a mentor, ‘You will never be content with your ‘no’ until you understand what you are saying ‘no’ to!,’” Sister Sara said. “This statement prompted me to explore a relationship with the Sisters of St. Francis of Philadelphia. It is through the witness of my sisters’ conversion and deepening relationship with Jesus that I am inspired to say ‘yes’ to this life.”

“I hope to be a witness through my own life to other young women,” Sister Sara said. “This life is amazing, wonderful and filled with unexpected surprise. Don’t say ‘no’ until you understand fully — because you might just discover it is actually ‘yes!’”

Sister Sara is the daughter of Patrick V. Marks (deceased) and Jane P. Marks of West Chester, and the sister of Jason P. Marks, of Monterey, Calif.; and Mary P.M. Hanley of West Chester.

Before entering the Sisters of St. Francis, Sara was the campus minister at Neumann University, Aston. Going forward Sister Sara is looking forward to beginning her new ministry as a case manager in a shelter for women and children at the Ministry of Caring in Wilmington, Del.

“This new ministry is an exciting shift for me,” she said, “one that will offer me an opportunity to work among and with a population of people who will surely reflect the face of Christ to me.”