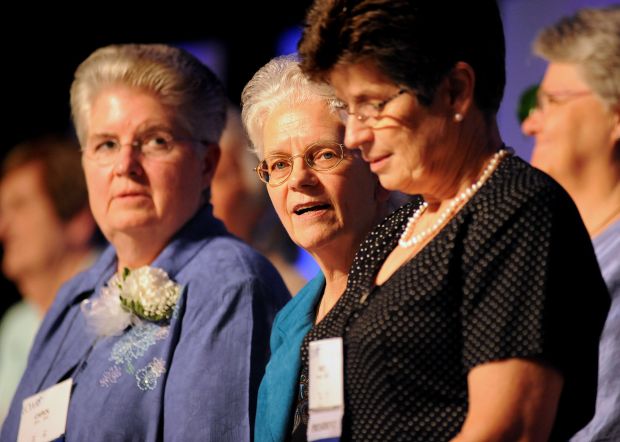 ORLANDO, Fla. (CNS) — The president of the Leadership Conference of Women Religious said organizers of this year’s assembly hope attendees would find it to be a contemplative experience because “it is imperative to view religious life within the context of our faith and in an evolving world.”

“We have included an hour and a half of contemplative prayer at all meetings to determine what the signs of today are calling us to and we hope that the entire experience of this assembly will be an act of contemplation,” said Franciscan Sister Florence Deacon.

A sense of quiet and expectation seemed to permeate the assembly as 825 women religious gathered at the Caribe Royal Hotel and Convention Center in Orlando Aug. 12-16.

Representing the majority of 57,000 religious sisters in the U.S., the attendees undertook an agenda that included: discussions on the doctrinal assessment of LCWR by the Congregation for the Doctrine of the Faith as well as a focus on immigration issues; a resolution on nonviolence; presentation of the 2013 Outstanding Leadership Award; and the election of a new president-elect and secretary.

“I’m really amazed to see all of you — so numerous, so full of joy to serve the Lord,” said Archbishop Carlo Maria Vigano, papal nuncio to the U.S. “You are so many and behind each of you is a long and wonderful story of love of church and the poor. … I thank you for your kind invitation and your openness and communication. And I bring to you the heartfelt wishes of the Holy Father, who is in a spiritual bond with you.”

Also addressing the assembly Aug. 13 was Archbishop J. Peter Sartain of Seattle, who was appointed by the Vatican doctrinal congregation last year to oversee a reform of LCWR.

LCWR is a Maryland-based umbrella group that claims about 1,500 leaders of U.S. women’s communities as members, representing about 80 percent of the country’s 57,000 women religious. The organization’s canonical status is granted by the Vatican.

In April 2012, the Vatican issued an assessment of LCWR, citing “serious doctrinal problems which affect many in consecrated life.” The assessment called for the organization’s reform to ensure its fidelity to Catholic teaching in areas including abortion, euthanasia, women’s ordination and homosexuality.

In introducing Archbishop Sartain, Sister Carol Zinn, a Sister of St. Joseph and president-elect, included his episcopal motto, “Of you my heart has spoken,” from Psalm 27.

The archbishop began his comments with an anecdote from his episcopal ordination. In 2000, he was ordained bishop for the Diocese of Little Rock, Ark.; six years later he was named to the Diocese of Joliet, Ill., and in December 2010 was installed in Seattle.

“After I was ordained, I was then escorted to the chair — the cathedra — and when I sat, my feet didn’t touch the floor,” which brought a chuckle from him and the congregation, recalled Archbishop Sartain.

“There’s always going to be a great gap between what God calls us to do and our capacities,” he told the LCWR assembly. “God’s grace and mercy are far greater and our feet will never touch the floor.”

Archbishop Sartain continued, “Over the past 18 months, we’ve had significant conversations – serious, humorous, with solidarity and understanding — one that has made this a time I’ve looked forward to. It is impossible for me to conceive of the task the Holy Father has given me to achieve for CDF without thinking of you and all I have worked together with you.

“It is very personal. I am here as a representative for Pope Francis for this one task, but I am here as your brother and friend.”

In her presidential address, Sister Deacon presented reflections on what it means to be a faithful woman of the church as a framework for a way forward in LCWR’s relationships with church leaders.

Referring to the doctrinal assessment, she told the assembly: “Our situation reflects larger questions and concerns such as the ongoing implementation of the Second Vatican Council; the ecclesial roles of women religious and of the laity, especially women; understandings of authority, faithful dissent, and obedience; and the need for spaces where honest, probing questions about faith and belief can be raised and discussed.”

Later in an interview, a consultant to LCWR, Donna Fyffe, said a tenor of openness and conciliation at the assembly was clear, which she described as a first step of any contemplative process.

Fyffe is president of CommunityWorks Inc., an international consulting firm based in Indianapolis. Her expertise is community building and leadership development. She is helping LCWR on its planning process.

“There is real grace in this,” Fyffe said, “hearing the issues, concerns of the other and wanting to be in this together. The group stepped up to the process and has been so faithful.”