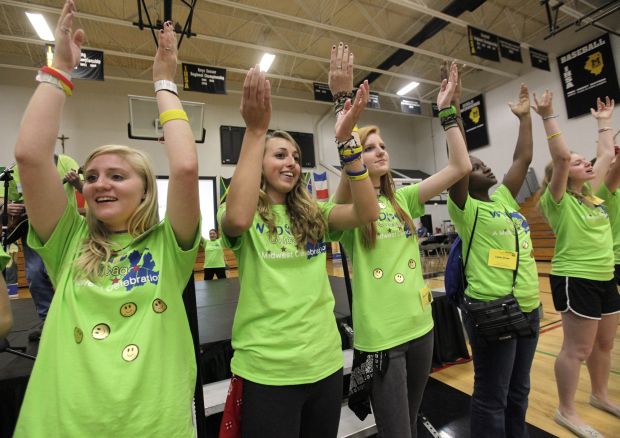 CHICAGO HEIGHTS, Ill. (CNS) — Hundreds of teens came together at a Catholic high school in Chicago Heights to pray, to learn about their faith and to be in solidarity with young people from around the world who came together at the same time with Pope Francis at World Youth Day in Rio de Janeiro.

“WYD Chicago: A Midwest Celebration” included catechetical sessions, prayer opportunities and liturgy for teens in ninth through 12th grade at Marian Catholic High School July 27. Participants included members of youth groups from many Chicago-area parishes, as well as a contingent from the Archdiocese of Detroit, and groups from other Midwest dioceses.

Across the country, in the Los Angeles Archdiocese more than 200 young adults ages 18 to 35 participated in an all-night vigil at the Oasis de Misericordia Catholic Center from midnight July 28 until 9 a.m. the next morning. The vigil included special prayers and musical performances by local bands.

In Washington, “Rio in DC” brought World Youth Day to the Franciscan Monastery of the Holy Land. The event was sponsored by the Washington Archdiocese’s Office of Young Adult Ministry in partnership with the monastery. About 350 young people came together to watch a live feed of the pope at the vigil on Copacabana beach. There also was an outdoor candlelit Mass celebrated in English and Spanish, Brazilian food and samba dancing.

“The response to the event has exceeded our expectations and speaks to young adults’ serious interest in their faith,” Jonathan Lewis, event organizer and archdiocesan coordinator of young adult ministry, said in a statement before the event.

“Pope Francis has been a witness to hope and joy and that is something that every human heart is actively seeking and why so many young Catholics flock to celebrate that hope and joy in community,” he added.

In Illinois, a group of 39 pilgrims — 28 young people ages 15-19 and 11 chaperones from the Diocese of Saginaw, Mich. — made the Chicago celebration their last stop on a two-week journey that included 10 Catholic sites from Michigan and Wisconsin to Utah and Oklahoma.

While not every visit was timed to coincide with a special event or celebration, the group happened upon many such occurrences. For example, one of the first stops was at Holy Hill in Wisconsin, and it fell on the feast of Our Lady of Mount Carmel, a festival day for the Carmelite shrine.

Still, he said, the World Youth Day celebration was one of the best parts of the pilgrimage. 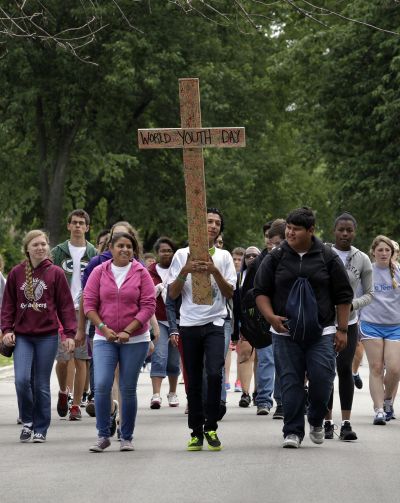 “It’s really cool to see a lot of youth come together,” he told the Catholic New World, newspaper of the Chicago Archdiocese.

Citlalli Cazales and Franchesca Almodovar, both 12, came with the youth group from Chicago’s St. Mark Parish. The youngsters said they had learned a lot from the talks they attended, especially the opening keynote by Noelle Garcia, who shared her personal story of overcoming depression, poor self-image and cutting herself, and John Donohue Grossman’s catechetical session on “Taking It to the Streets,” which focused on finding Christ in the outcast.

“I wanted to grow in my faith,” Cazales said. “I wanted to build a bigger connection with God.”

Martina Umoh, 16, traveled with young people from her parish in Detroit for the same reason. She had heard about World Youth Day, and wanted to experience a coming together with other young Catholics.

Jojuan Jackson, 15, who also was part of the group from Corpus Christi Catholic Community in Detroit, agreed.

“I’m really enjoying being with my brothers and sisters,” he said. “It’s like a big family.”

Reactions like that were music to the ears of Kelsy Overland, 16, and the other 21 young “animators,” whose job it was to keep everyone excited.

Overland is a member of the youth group at St. Lawrence O’Toole Parish in Matteson; she and the other animators were nominated by their youth group leaders. She said she’s never been shy, especially about sharing her faith, so helping people come out of their shells was natural to her.

“You yourself have to be over the top,” she said. “You have to make sure people know you’re actually enjoying yourself. They’ll follow your lead.”

“I’ve never heard someone give a talk that was so geared toward teenagers,” she said. “At the beginning, it was like, ‘He is insane,’ and by the end, we were insane with him.”

Some of the young people also took the opportunity to meet Chicago Cardinal Francis E. George, who offered one of the catechetical sessions and was the main celebrant of the closing Mass.

At his catechetical session, the cardinal encouraged young people to share their faith, even when it isn’t the easiest or most popular thing to do.

“The mission of the church isn’t just for the people called missionaries,” he said.

He also spoke of the privilege of electing two popes, but turned that experience into an example of how young people can bring the Holy Spirit into their own lives as they make the many decisions that face them.

Cardinals, he said, must free themselves to vote for the man they believe will best lead the church — that is, the one the Holy Spirit wants, not the one that they want because he is a friend or a countryman. In the same way, young people should bring their choices before the Lord.