‘Love of neighbor’ called motivation for Knights’ commitment to charity 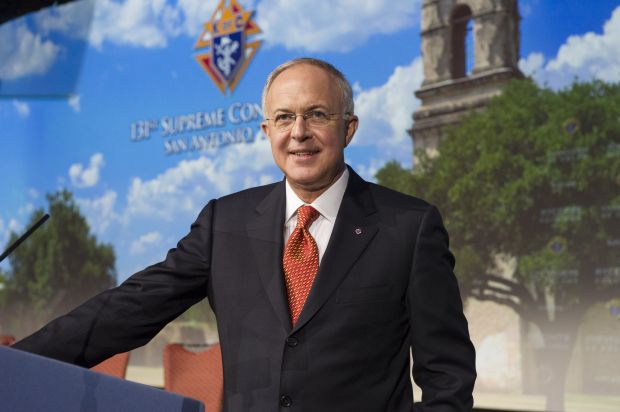 SAN ANTONIO (CNS) — Saying “our order is stronger today than ever before, and the best is yet to come,” Supreme Knight Carl Anderson delivered an annual report Aug. 6 that chronicled the record-setting activity of the Knights of Columbus at the organization’s 131st annual convention.

For the 13th consecutive year, Knights’ charitable contributions have grown. While charitable giving in the United States grew by 2 percent last year, charitable donations from the Knights of Columbus grew three times as much, by 6 percent. That increase of $9.4 million set a record of $167.5 million donated last year.

Anderson focused on a number of charitable undertakings carried out by the order within the past year, such as helping victims of disasters including Hurricane Sandy, the recent explosion in West, Texas, and the tornadoes in Oklahoma.

“Charity has always been a defining characteristic of the Knights of Columbus because our love of neighbor has always motivated us to protect God’s gifts,” he said. “From the beginning, we have understood that God’s gifts include the poor, the suffering the marginalized — in other words — every human being.”

Pope Francis has lived out charity in a way that is unmistakable, said Anderson, adding that the pontiff’s “leadership in charity through his teaching and personal actions are an example for every member of this order.”

The Supreme Knight said that membership in the international fraternal organization grew for the 41st consecutive year, to a record 1,843,578 Knights. Close to 230 new councils were added, including eight in Mexico, 10 in Poland, 13 in Canada, 80 in the Philippines, and 117 in the United States, bringing the total number of councils to 14,606.

In addition, the Knights continue to rank among America’s largest companies, climbing 56 spots to number 909 on this year’s Fortune 1,000 List. And, insurance in force reached $90.6 billion, nearly double the amount just 10 years ago.

Anderson received a standing ovation when he spoke of the order’s opposition to the U.S. Department of Health and Human Services’ requirement — better known as the HHS mandate — that most employers provide insurance coverage of contraceptive services for employees, even if the employer objects on moral grounds.

“We continue to work to undo the HHS contraceptive mandate, which attempts to force us to violate our fundamental religious beliefs regarding abortion-inducing drugs, sterilization, and contraception,” he said. “I am confident that as has occurred already in many court cases, this ill-conceived mandate will ultimately be found unconstitutional.”

He quoted from a speech Pope Francis gave to the bishops gathered in Brazil for World Youth Day in late July: “Our pastoral work does not depend on a wealth of resources, but on the creativity of love.” Then Anderson said: “Through charity, we strengthen our own faith through our love of neighbor and evangelize those around us through this witness. We show ourselves to be protectors of God’s gifts and we invite others to join us in protecting those gifts.”

Prior to Anderson’s report, a letter of greeting to the annual convention from the pope was read by Archbishop Carlo Maria Vigano, apostolic nuncio to the United States.

Pope Francis praised the charitable works of the Knights of Columbus and encouraged the organization to defend the sanctity of marriage, the dignity of life, the beauty and truth of human sexuality, and the rights of believers.

“In this time of rapid social and cultural changes,” the letter stated, “the protection of God’s gifts cannot fail to include the affirmation and defense of the great patrimony of moral truths taught by the Gospel and confirmed by right reason, which serve as the bedrock of a just and well-ordered society.”

More than 2,000 Knights and their family members were attending the 131st supreme convention, which was to continue through Aug. 8.