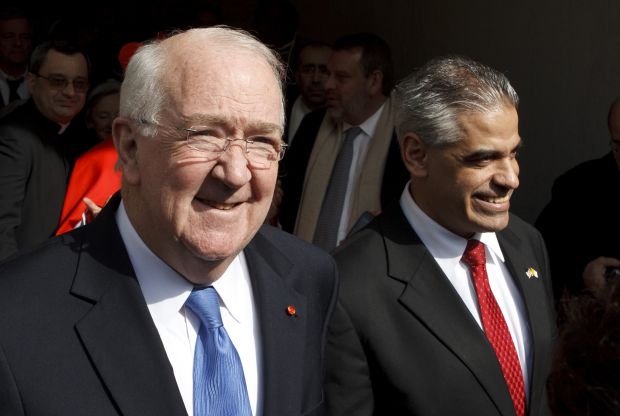 “We are overjoyed that the country will be represented by a man who through his decades of service has demonstrated his commitment to the dignity and sanctity of life and fighting global poverty,” said an Aug. 2 statement by Hackett’s success at CRS, Carolyn Y Woo. ” We look forward to working with the new ambassador as he engages the Vatican and Pope Francis towards the common goal of advancing peace and justice in the world.”

President Barack Obama nominated Hackett June 14 for the position on the same day he announced nominees for ambassador posts in Brazil, Spain, Germany, Denmark and Ethiopia.

“It gives me great confidence that such dedicated and capable individuals have agreed to join this administration to serve the American people. I look forward to working with them in the months and years to come,” the president said.

Hackett retired in December 2011 after 18 years as president of CRS, the U.S. bishops’ overseas relief and development agency.

As U.S. ambassador to the Vatican, he succeeds Miguel Diaz, who left the post in late 2012. Diaz now is a professor of faith and culture at the University of Dayton, Ohio.

Hackett was appointed president of CRS in 1993. During his tenure, he established a division focusing on outreach to dioceses, parishes, Catholic organizations, and colleges and universities, and laypeople were first appointed to the CRS board of directors.

Catholic Relief Services now operates in more than 100 countries, with a global staff of nearly 5,000.

“I had the privilege of knowing Ken Hackett for many years and working directly with him for three years at Catholic Relief Services,” said an Aug. 5 email from another CRS executive, Joan Rosenhauer, executive vice president of U.S. operations.

“One of things I most admired about Ken was his integrity. He always sought to do the right thing, even if it wasn’t the easiest thing,” Rosenhauer said. “I’m delighted that he will now bring these qualities and his broad experience to his new role representing our country as U.S. ambassador to the Vatican.”

One of Hackett’s predecessors to his new post, L. Francis Rooney, told Catholic News Service Aug. 5: “Far be it from me to offer advice to an incoming ambassador. But he is tremendously qualified to do the job, given his background with Catholic Relief Services. The Holy See needs a good person, and they’ve got one.”

Rooney, who served as ambassador 2005-08, said regardless of lack of previous diplomatic experience, “the State Department does a very good job of preparing both career and political appointees before going to their posts,” mentioning reading lists and consultations. Even so, “going to the Holy See it is overwhelmingly enjoyable to be at the home of our Catholic Church. I could never have underestimated how exciting it was to be there.”

“I think it’s a terrific appointment,” said Gerard F. Powers,” a professor of the practice of Catholic peacebuilding at the Kroc Institute for International Peace Studies on the campus of the University of Notre Dame. “I think he has substantial experience both with church institutions and working with government, including some important government institutions, which makes him very well positioned to do what the ambassador to the Holy See is expected to do.”

Powers told CNS, “He has this unusual understanding — a deep understating — of both the church and a working understanding of the U.S. policy relative to the Catholic Church.”

Born in West Roxbury, Mass., Hackett joined the Peace Corps shortly after his 1968 graduation from Boston College. Assigned to a Catholic mission in rural Ghana, he worked in an agricultural cooperative and saw “the actual impact of American food aid on the health and well-being of very poor kids in a very isolated part of a West African country,” he said recently.

After completing his Peace Corps assignment, Hackett joined CRS, the U.S. Catholic relief and development agency, in 1972. He started his career in Sierra Leone, where he managed a nationwide leprosy program and a maternal and child health program.

Subsequent positions took him to various posts in Africa and Asia, as well as in CRS’ Baltimore headquarters. As regional director for Africa, he managed the agency’s response to the Ethiopian famine of 1984-85. He also supervised CRS operations in East Africa during the crisis in Somalia in the 1990s.

In February 2012, Hackett and Diaz represented the U.S. government at the consistory led by Pope Benedict XVI in St. Peter’s Basilica at the Vatican ceremony. Pope Benedict XVI created 22 new cardinals from 13 countries — including two from the United States and one from Canada.

In May of that year, he received the University of Notre Dame’s Laetare Medal during commencement ceremonies. The medal has been given annually since 1883 to a Catholic “whose genius has ennobled the arts and sciences, illustrated the ideals of the church and enriched the heritage of humanity.”

In announcing that honor, Holy Cross Father John I. Jenkins, Notre Dame’s university president, said in a statement: “Ken Hackett has responded to a Gospel imperative with his entire career. His direction of the Catholic Church’s outreach to the hungry, thirsty, naked, sick and unsheltered of the world has blended administrative acumen with genuine compassion in a unique and exemplary way.”

Hackett is a former North American president of Caritas Internationalis, the confederation of humanitarian agencies of the Catholic Church and a former member of the board of the Pontifical Council Cor Unum at the Vatican. He also has been an adviser to the U.S. Conference of Catholic Bishops.

Hackett was on the board of the Millennium Challenge Corporation, the congressionally mandated independent development agency, from 2004 to 2010. He has received numerous honorary degrees.

After retiring from CRS, Hackett was named a consultant to the University of Notre Dame’s Institute for Global Development.

NEXT: Madagascar archbishops confirm no contraceptives in CRS programs