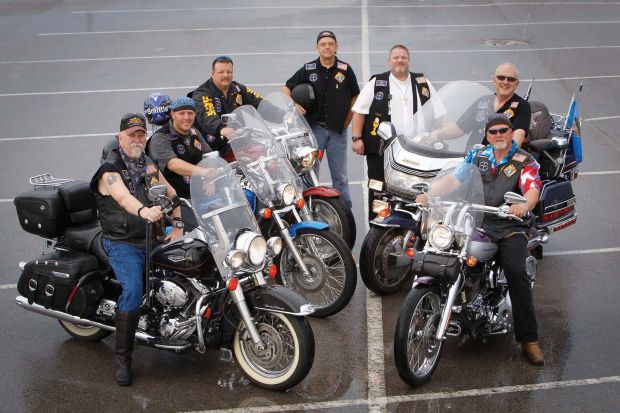 Knights on Bikes from the Diocese of Tulsa, Okla., pose for a photo in Tulsa in May. Pictured from left are Charlie Hoy and Matt Buckendorf from Holy Family, Jerry Smittle, Al Yowell from St. Anne, state chaplain Father Jim Caldwell, state president Mark Cearley and Bob Mogelnicki from St. Bernard. Theirs is a motorcycle ministry dedicated to improving the image of bikers and promoting safety and Christian values. (CNS photo/Dave Crenshaw, Eastern Oklahoma Catholic)

TULSA, Okla. (CNS) — Members of the Knights on Bikes adamantly make it clear that they are not a “bike gang.”

While they proudly wear a vest with a patch, they claim no territory like a traditional motorcycle club. Instead, as an extension of the larger ministry of the Knights of Columbus, the group is a family friendly organization that seeks to serve the Catholic Church and the community through a common interest in riding motorcycles.

It is a motorcycle ministry dedicated to improving the image of bikers, promoting safety and Christian values.

In April 2005, Raymond C. Medina in Fort Worth, Texas, founded Knights on Bikes as a way to further the work of the Knights of Columbus by organizing members who are also motorcycle riders. It is now an international group with chapters in more than 30 states and in Mexico, Canada and the Philippines.

Their motto is “In God We Trust and Ride,” and they strive to address the spiritual and cultural needs of the Knights of Columbus and encourage faith, friendship and service.

Members demonstrate their faith in God through evangelism and fidelity to Catholicism and say supporting their priests and serving the church are integral aspects of their organization. Involvement in their local Knights of Columbus councils is assumed.

In Oklahoma, Mark Cearley is currently president of the Oklahoma Knights on Bikes. He told the Eastern Oklahoma Catholic, Tulsa’s diocesan magazine, that when he was selected for the post, he felt “a little overwhelmed.” He was already involved in several ministries through his parish, St. Pius X in Tulsa.

“Then I thought of the good friends and fraternal brotherhood that is the KOC. The Knights on Bikes is a great way for our order to be seen in the public, away from the church, and getting more men excited to join our brotherhood,” he added. 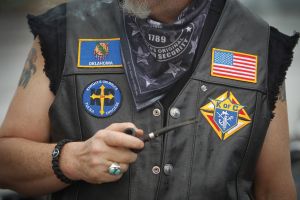 Charlie Hoy, a member of the Knights on Bikes from the Diocese of Tulsa, Okla., proudly displays patches on his vest in Tulsa in May. (CNS photo/Dave Crenshaw, Eastern Oklahoma Catholic)

Members serve the community through charitable works, while they enjoy camaraderie with their brothers in faith as motorcycle riders.

They ride in parades, visit nursing homes, raise money for the needy, help plan rallies and parades, as well as make themselves available to serve their local bishop, priests and parishes in various capacities.

In the Tulsa Diocese, headed by Bishop Edward J. Slattery, members have taken on a number of projects. They served as escorts for a fourth-degree Knights color guard in the Tulsa Christmas Parade the last two Decembers.

Oklahoma Knights on Bikes collected donations to benefit the family of Joey Pustajovski, a volunteer firefighter and a Knight, who died in the fertilizer plant explosion in West, Texas, in April. Pustajovski left a wife and four children. Knights on Bikes in both Oklahoma and Texas were able to raise more than $4,000 for the family.

Cearley said the organization tries to schedule one ride a month so members can visit their brothers in other councils, cities and states.

Cearley believes that Knights on Bikes provides an outreach to Catholic men to help them grow in their faith. He was first a motorcycle enthusiast and then a Catholic. He joined a different group of Catholic motorcycle enthusiasts but said he and fellow members from the Tulsa Diocese became disenchanted with it because it strayed from solid Catholic foundations.

Then he became aware of Knights on Bikes, and for him and other riders it became a new outlet for ministering to others while enjoying a passion for riding.

“You do not have to have an expensive bike to ride or join us,” explained Cearley. “You don’t have to clean the bathrooms or go get pizzas. All you have to do to join is to be at least a first-degree Knight in your local Knights of Columbus Council — that’s it! There are no dues with Knights on Bikes at this time; only a patch fee to cover expenses for having the patches and decals made.”

Interest in the Knights on Bikes has grown considerably over the past year. Each month they continue to add new members. The group started with five members in February 2012 and now has 28 members statewide, with half of them from the Diocese of Tulsa.

“We are a growing group as evidenced by our membership numbers,” said Cearley. “If you are interested, join your local Knights of Columbus then come and ride with us for a great experience and fraternal brotherhood.”

Beecroft is associate editor of Eastern Oklahoma Catholic, the magazine of the Diocese of Tulsa, Okla.

NEXT: Pro-lifers hope North Carolina law leads to day when all choose life