At home and abroad, popemobile fills with gifts for pope 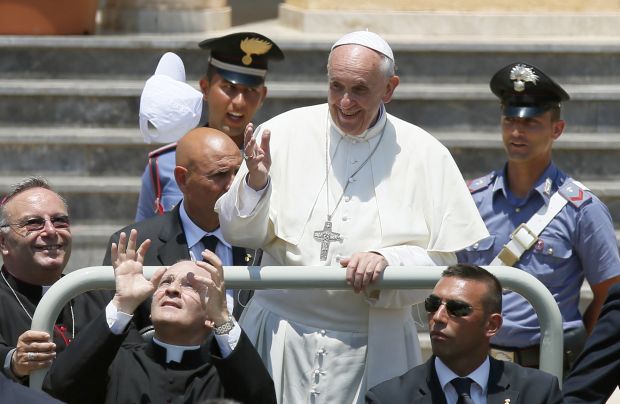 A white baseball cap is thrown toward Pope Francis as he leaves in a jeep after visiting San Gerlando Parish in Lampedusa, Italy, July 8. (CNS photo/Paul Haring)

VATICAN CITY (CNS) — When he’s riding in the popemobile — at the Vatican or, for example, in Rio de Janeiro — Pope Francis uses his hands not just to bless people and hold the babies he’s kissing. He uses them to catch things.

Tossing, lobbing and throwing things to the pope or into the popemobile has been a growing phenomenon at the Vatican, but it took on epic portions during World Youth Day in Rio.

“We filled a jeep four times with objects of every kind,” said Alberto Gasbarri, the chief organizer of papal trips.

“It’s true, it was pretty substantial,” said Jesuit Father Federico Lombardi, the Vatican spokesman. It wasn’t clear if the ring belonged to a bishop who tossed it or if it was meant as a gift from one of the pilgrims to the pope.

The haul was divided between the Archdiocese of Rio de Janeiro and the Vatican, Gasbarri told Catholic News Service Aug. 6. Some of the things left behind will be souvenirs of the pope’s visit, while much of the clothing will be distributed to the poor.

The ball and soccer jersey Pope Francis left before an icon of Mary July 29 at the Basilica of St. Mary Major — when he stopped there on the way home from the airport — came from the Rio collection, Gasbarri said.

The same thing happens at the Vatican with papal gifts. Items handed to the pope or simply tossed into the popemobile are sorted. Some end up catalogued and stored, including in the Vatican Museums, but the clothing and most of the edibles go to the diocesan Caritas, the Vatican shelter run by the Missionaries of Charity or the Vatican’s maternal and pediatric clinic, which serves mainly immigrants and is run by the Daughters of Charity of St. Vincent de Paul.

At least once, Pope Francis reached into the bottom of the popemobile and recycled a gift himself. During a weekly general audience in St. Peter’s Square in mid-June — a hot, intensely sunny day — the pope kissed two little boys and motioned for their parents to put hats on them. A little while later, one of the Vatican security officers held up another hatless boy. The pope kissed the boy, patted him on the cheek then told the officer to wait while he reached down and found a hat. The green baseball cap was a little large, but he put it on the boy’s head anyway.

Asked if the gift tosses frighten Vatican security, Father Lombardi said, “I asked them that, too. They said not really. The pope’s not afraid.”

PREVIOUS: Pope restricts use of old Mass by Franciscan Friars of the Immaculate

NEXT: Missionary activity is service to hurting world, pope says in message