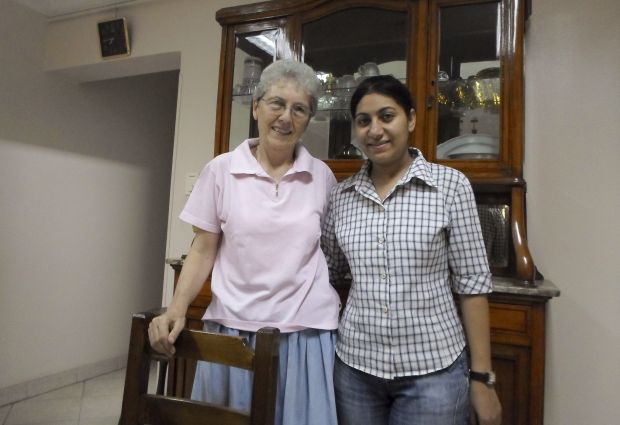 Canadian Sister Darlene DeMong, a member of the Congregation of Notre Dame de Sion, stands with a novice at the order's residence in Cairo Aug. 22. (CNS photo/James Martone)

CAIRO (CNS) — Churches and other Christian properties around Egypt had already been looted, so when Catholics in Berba were tipped off that their southern village could be next, they acted fast.

They and other Christian leaders got on their phones and called their Muslim friends, neighbors and colleagues who all had the same message:

“They were told, ‘Don’t be afraid, we will guard your churches,’ and that is what happened,” said Sister Darlene DeMong, a Canadian member of the Congregation of Notre Dame de Sion who has worked and lived in Egypt since 1978. She was in Berba at the time the warning came Aug. 16.

When she and two other sisters left the parish convent to stay with village families, “groups of (Muslim) village men showed up to guard it” Sister Darlene told Catholic News Service Aug. 22.

The men positioned themselves in front of the Catholic church and its development center, as well as in front of Berba’s other Christian facilities, Sister Darlene said from the order’s Cairo residence. She was set to fly from Egypt to Jordan with a novice Aug. 23 on a previously scheduled trip.

“The day went by peacefully and we returned home about 6 p.m., but the men stayed outside our house and in front of the church and the development center all night, and we had no problems, Alhamdulilah,” said Sister Darlene, using the Arabic for “God is compassionate.”

Egyptian human rights groups report that a growing number of Christian institutions are under attack in the general state of violence that has engulfed the country since early July, when Egypt’s military overthrew the elected Islamist president, Mohammed Morsi, following mass popular protests against him.

The rights groups say such attacks have intensified since Aug. 14, when the country’s security forces used bulldozers and tear gas to vacate two Cairo camps where thousands of pro-Morsi demonstrators and been living. Hundreds were killed in the siege.

Sister Darlene said that on Aug. 18 in Berba, about 150 miles south of Cairo, the parish priest made special note of what the village’s Muslims had done to protect their Christian neighbors.

“He thanked them, and they could hear it through the sound system,” she said.

About 10-15 percent of Egypt’s 82 million people are Christian, most of them Coptic Orthodox. Egypt has 200,000-300,000 Catholics, most of them of the Eastern Coptic rite. The vast majority of Egyptians are Sunni Muslims.