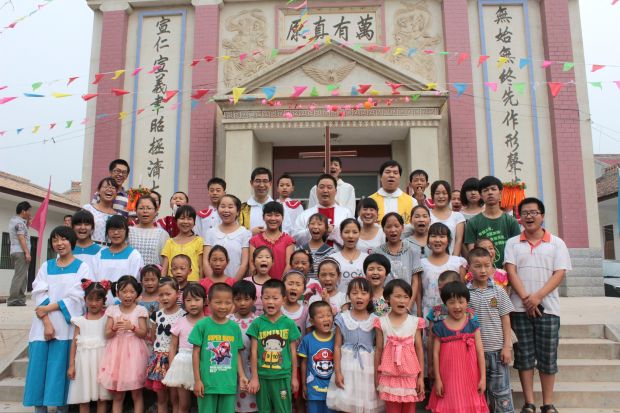 Children gather with parish priests for a photo on the steps of Sacred Heart of Jesus Church in the village of Fufengxian, in China's Shaanxi province, in late July. (CNS photo)

BEIJING (CNS) — Many rural villages in Shaanxi do not have a Catholic parish, and some with churches struggle with sparse attendance.

But the village of Fufengxian, near the town of Baoji, has a population that is more than 80 percent baptized Catholics. When villagers are not tending to their apple orchards, they can be found attending Mass or praying at Sacred Heart of Jesus Catholic Church.

They call themselves “China’s Hometown of Apple Catholics.”

The official population of Fufengxian stands at a mere 300, but many young adults have migrated to the big cities, so most of those who remain are elderly farmers and young children. About 90 villagers live there permanently, while more than 70 residents are parishioners.

The church was established in 1986, as the Chinese Catholic Church was emerging from decades of communist repression.

The parish currently is served by three priests and three sisters from the Franciscan Missionaries of Mary.

Sister Ma Wang-ge said the nuns had received medical training so they could open up a small medical clinic with a pharmacy in the village. They have taught many local children how to read by tutoring them and organizing Catholic catechism classes, she told Catholic News Service in an email interview.

Although the Chinese government has been accused of persecuting some religions, including Catholics, Sister Ma said Fufengxian has not had any problems with Beijing.

“We are just a village of farmers and all of us work hard to make a living,” she said. “We are not a threat to Beijing, since we prefer a stable life just like our government does, so officials do not interfere with our parish.”

She said farmers prefer a daily routine for their work, and the same goes for their spiritual activities. Mass is celebrated at 7 p.m. on Saturdays and 6 a.m. on Sundays, and the parish offers a weekday prayer service at 7 p.m.

“It is always crowded at these times,” she said. “The villagers come with sincere faith in their hearts.”

One thing they pray for is that diplomatic relations be established between the Vatican and China.

“Everybody in our church, as well as Catholics in China, we all hope and pray that the pope could come visit our nation. Oh, what a wonderful day that would be for Chinese Catholics,” Sister Ma said. “If Pope Francis comes to China, the farmers in our parish would love to greet him and give him a basket of our delicious apples.”