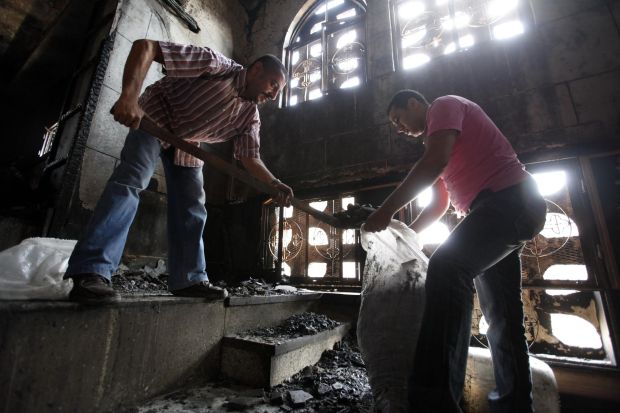 Christians clean up a Coptic Christian church May 8 after it was set on fire during clashes between Muslims and Christians in Cairo. (CNS photo/Mohamed Abd El-Ghany, Reuters)

CAIRO (CNS) — Attacks on Christian churches and institutions in Egypt appeared to be the result of Islamist extremists’ anger over what they perceived as Christian support for the ouster of former President Mohammed Morsi.

In mid-August, three days after the military crackdown on Morsi supporters, Egypt’s Catholic Church published a list of 58 destroyed or damaged Christian churches, as well as a commentary by the country’s leading Jesuit criticizing the West’s characterization of “poor persecuted Muslims.”

On Aug. 18, after five days of “terrorist attacks, killings and the burning of churches, schools and state institutions,” Coptic Catholic Patriarch Ibrahim Isaac Sedrak, president of the Council of Catholic Patriarchs and Bishops in Egypt, thanked “our honorable Muslim compatriots who have stood by our side, as far as they could, in defending our churches and our institutions.”

In the ensuing days, stories began emerging of attacks against Christian institutions. As far back as December, Islamists had been accusing Christians of being the predominant force behind the protests against Morsi, Egypt’s first democratically elected president, who took office in mid-2012. Some observers said Christians were uncomfortable with the politicized Islam that was emerging under Morsi and his Muslim Brotherhood.

Coptic Orthodox Pope Tawadros II and Egypt’s grand imam, Sheik Ahmed el-Tayeb, appeared alongside Gen. Abdel Fattah al-Sisi during his televised announcement July 3 that Morsi had been removed from office, increasing the impression of Christian involvement in what some termed a military coup and others described as the military enacting the will of the people.

The Christian Science Monitor reported in mid-August that in one Egyptian village, red marks were still visible from where Christian houses were marked in red graffiti in late June as residents vowed to protect Morsi’s legacy.

After the Aug. 14 military crackdown, angry extremists throughout Egypt seemed to target Christians and police, although moderate places of Islam also were targets.

Internet photos of two Christian churches attacked in Mallawi, in Minya, a province south of Cairo where Christians make up around 35 percent of the population, showed decapitated statues, burned courtyards and door frames, sacked and burned church offices and piles of rubble.

In a widely published interview with the Associated Press, Franciscan Sister Manal, principal of a school in Bani Suef, told of a six-hour ordeal in which a mob broke into the school, stole all computers and furniture and set multiple fires. At times, she told AP, she was overcome by fumes from the fire and tear gas from police. She said the mob knocked the cross off the street gate and replaced it with a black banner resembling the al-Qaida flag.

Sister Manal said the school educated about equal numbers of Christians and Muslims, so when a parent who was a police officer had warned her the school was targeted by extremists, she did not pay attention.

After the attack, the extremists paraded Sister Manal and two other nuns through the streets before a Muslim — a former teacher at the school — offered them shelter.

Meanwhile, 35 Coptic Orthodox and Protestant churches were attacked in various towns and cities, as well as an Anglican church in Suez.

Six Christian sites were burned by crowds in Fayoum and five others in Sohag, said the report, which added that all the incidents had been “verified by representatives of the Christian churches.”

Christian homes, shops and hotels were also looted in Minya, el-Arish, Assiut and Luxor, along with offices of the ecumenical Bible Society in Cairo, Assiut and Fayoum.

In a commentary on the Coptic Catholic Church’s website, Jesuit Father Henri Boulad, who directs the Jesuit Cultural Center in Alexandria, Egypt, criticized Western reactions to the military clampdown against the Muslim Brotherhood and accused governments and media of also failing to condemn the killing of Christians.

He said a mosque in Cairo’s Rabaa district had been turned into “a veritable powder-house” and “revolting arsenal of war,” while Muslim Brotherhood members, “armed to the teeth,” had “spread terror throughout the population of Egypt” with “murders, abductions, ransom demands, thefts and rapes.”

“Now the West is outraged, shocked and scandalized because the Egyptian army has dared dislodge the Muslim Brothers,” said the 82-year-old priest, a former Middle East Jesuit provincial and former head of Caritas in Egypt.

The priest said the June 2012 election of Morsi had been a “vast masquerade,” characterized by “enormous fraud,” adding that 1,500 Egyptians had since been “massacred by Morsi’s militias.”

“When Egypt finally decides to react and bring some order to this mess, the West cries about persecution, injustice and scandal,” Father Boulad said in his commentary.

NEXT: Canonization date for John Paul II, John XXIII to be known in September