Egyptians running out of food because they fear going outside, bishop says 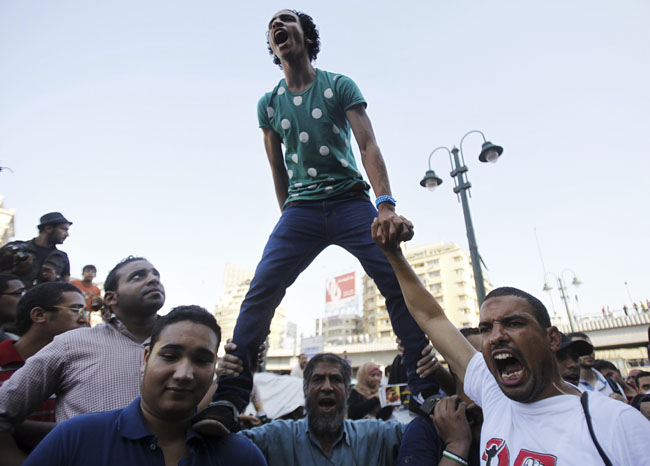 UPDATED — VATICAN CITY (CNS) — A Catholic bishop in Luxor, about 400 miles south of Cairo, said Muslims and Christians are afraid to leave their homes; because the shops are closed and no one is venturing outside, many are running out of food.

Coptic Catholic Bishop Youhannes Zakaria of Luxor told Fides, the news agency of the Congregation for the Evangelization of Peoples, “I’m crying for all these simple people — Muslims and Christians — who live in the villages nearby and don’t have anything because their food supplies are running out and people are afraid to leave their homes.”

“Even those who are well off can’t buy food because all the shops are closed,” he told Fides Aug. 20. “I’d like to go help them myself, but I can’t because I’m also forced to stay inside.”

The next day, Bishop Zakaria told Fides that some of the soldiers had brought him bread and the tensions in the city seemed to be lessening after the arrests of some of the leaders of the Muslim Brotherhood.

After Egyptian police and the military broke up camps of demonstrators protesting the ouster of President Mohammed Morsi, more demonstrations took place Aug. 16, including in Luxor.

“What remains in my mind is the image of Muslims trying to extinguish the flames and saving priests and nuns. This is the Egypt we were raised in and want to live in,” said Father Hani Bakhoum Kiroulos.

“After being chased from the center of Luxor, the pro-Morsi demonstrators arrived under my residence shouting, ‘Death to the Christians.’ Fortunately, the police arrived in time to save us. Now the police and the army have two armored vehicles parked here,” Bishop Zakaria said.

While the death and destruction in Luxor hasn’t been as bad as in other parts of Egypt, the bishop said the homes of some Christians have been burned and it seems prudent for people not to go out if possible.

Bishop Zakaria had said that he’d canceled the Aug. 22 celebrations of the Dormition of Mary, the Eastern equivalent of the feast of the Assumption, for security reasons. However, the next day he told Fides the liturgy would be celebrated, although he would do it in the morning instead of the evening.

“This year’s celebrations will be scaled down because we have to be careful,” he said. “But thanks to the police and military, we feel safer than we did a few days ago.”

The bishop said the Muslim Brotherhood is going after Christians because “they think Christians are the cause of Morsi’s fall. It’s true that Christians participated in the demonstrations against Morsi, but 30 million Egyptians — most of them Muslims — took to the streets against the deposed president,” he said.

“By attacking Christians, they want to throw Egypt into chaos,” Bishop Zakaria said.

Father Fady Saady, a Coptic Catholic priest in the province of Luxor, said his church had suspended nighttime activities, including games for children and youth meetings, due to the newly imposed 7 p.m. curfew. He said Mass for the Dormition of Mary would be at 5 p.m., instead of the usual 8:30 or 9 p.m.

“There is still a state of nervousness and thoughts that more difficulties lie ahead,” Father Saady told CNS by cellphone from his parish in the city of Naqada Aug. 20.

He said Naqada had “so far” been spared the attacks seen on Christian churches, schools and homes elsewhere throughout Egypt. He said the latest attacks on Christians were worse than those that occurred throughout the 1990s “because (the Muslim Brotherhood) is striking in the open, unlike before when they were striking in secret.”

Egypt’s Coptic Catholic Church has said it supports the country’s military in the face of what it calls “a war on terror” against the Muslim Brotherhood, which church and military officials blame for the attacks on Christian, government and security establishments. The Muslim Brotherhood has denied using violence in its campaign to restore Morsi to office.

On Aug. 20, Egypt’s Coptic Catholic Patriarch Ibrahim Isaac Sedrak sent condolences to the families of soldiers killed in the Aug. 19 attack in the country’s Sinai region.

He called the dead soldiers “martyrs” and said the church was asking God to give their families “consolation and patience in this ordeal.”

He did not mention at least 35 prisoners who died in a prison van in Cairo Aug. 18. Egyptian security says they were killed trying to escape, but Brotherhood members and other opposition forces say they were killed in cold blood.

On Aug. 19, another Coptic Catholic official accused those attacking Christian and government facilities of trying to foment strife and destroy the state, something he said “will not happen.”

“Egypt’s Christians and Muslims are from the same thread … the people will remain united and the Lord will protect Egypt and its entire beloved people,” said Father Hani Bakhoum Kiroulos, assistant to Patriarch Sedrak.

“What remains in my mind is the image of Muslims trying to extinguish the flames and saving priests and nuns. This is the Egypt we were raised in and want to live in,” he said on his Facebook page.

Contributing to this story was James Martone in Istanbul.

NEXT: Vatican’s Year of Faith celebrations to resume in September