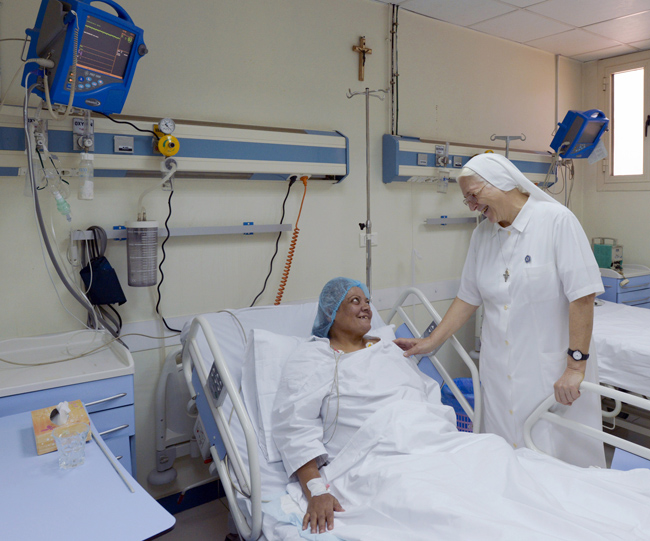 Sister Fiorenza Marchesin of the Franciscan Elizabethan Sisters checks in on a patient in the cardiac ward of the Italian Hospital in Cairo Aug. 25. (CNS photo/Dana Smillie) 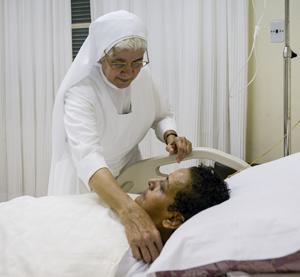 Sister Elizabeth Azim of the Franciscan Sisters of the Immaculate Heart of Mary tends to a patient at the Italian Hospital in Cairo Aug. 25. The Egyptian nun is a nurse in the hospital’s surgical ward. (CNS photo/ Dana Smillie)

CAIRO (CNS) — It was lunchtime at Cairo’s Italian Hospital, and some of the nuns who reside there were watching state television’s latest announcements on Egypt’s “war on terror,” the expression used by the country’s military and its supporters to describe the nationwide crackdown on Islamists.

“It is the first time I am afraid to go out, really afraid,” said Italian Comboni Sister Pina De Angelis, who has been in Egypt for 28 years.

The Egyptian army’s takeover in early July and its ensuing pursuit of people it claims are Muslim militants have led to deadly clashes throughout the country, including within ear-reach of the century-old hospital where Sister Pina and six other nuns from five different Catholic orders live and work.

But fears of what is outside the hospital gates — including a spike in attacks on the country’s Christian institutions — appeared to interfere little with the sisters’ chores inside the historic medical facility built by Egypt’s one-time vibrant Italian community.

Turning from the news on TV, Sister Pina reported that, as usual, she got up at crack of dawn and was often not in bed till well after midnight, in her role as coordinator for the hospital’s other six nuns who serve as nurses alongside a much larger medical staff made up of mostly Muslims.

In addition to coordinating the nurses, corresponding with institutions outside the hospital, organizing medical assistance for Egypt’s Catholic clergy as well as for the occasional sick Italian tourist, Sister Pina said she also served as just plain friend to those in need.

“Sometimes (Muslim) patients look for me and want to talk. One older man, a dialysis patient, always asks to see me, and if he doesn’t find me, the next time he sees me he asks ‘why didn’t you look for me'” Sister Pina told Catholic News Service Aug. 22.

Sister Pina said that as things got increasingly tense in Egypt, colleagues and friends asked her why she did not want to return to Italy. She said she responded that “now is the right time to stay here because, first of all, I don’t want to escape from difficulties, and second, so that Egyptians see that we are part of the Egyptian people.”

She was seated with other nun colleagues at a dining room table inside the house where they all reside on the hospital’s grounds, just a few steps away from a tiny Catholic church.

“In Egypt, you have to understand that the regular Muslims respect us,” said Egyptian Sister Elizabeth Azim, one of the other nuns seated at the table. She works as a nurse in the hospital’s surgical ward.

Sister Elizabeth lamented the recent increase in attacks on Christian sites across the country, including one on a school in southern Egypt run by her order, the Franciscan Sisters of the Immaculate Heart of Mary. In that attack, she said, a Muslim woman accompanied three of the school’s nuns to the safety of her home.

“I am telling you, (Egyptian) Muslims love us,” said Sister Elizabeth, who was born in Assiut, in Egypt’s South. “What is happening is not the work of Muslims, it is terrorists,” she said, adding that “if we lose some of our schools and churches but eventually get rid of terrorism, then this is a price worth paying.”

Egypt has long witnessed strife between the country’s Muslim majority and its Christian minority, which represents as much as 15 percent of the country’s more than 82 million people.

But human rights groups observe a general state of violence spurred by the military’s July 3 overthrow of Islamist President Mohammed Morsi, after mass protests against him, and the subsequent forced removal of thousands of Morsi supporters from two protest camps in Cairo Aug. 14.

The violence has included attacks on government and security facilities, as well on the homes, churches and other institutions belonging to Christians whose religious leaders — among them Coptic Catholic Patriarch Ibrahim Isaac Sedrak and Coptic Orthodox Pope Tawadros II –have openly backed the army.

The effect of the surrounding violence on the Italian Hospital, said the nuns, had so far been limited.

“Some of the hospital employees, Muslims and Christians, have to leave work early” to get home before the recently imposed nationwide nighttime curfew, said Sister Pina.

And the tension outside has also led to heated political debate inside the hospital among some hospital staffers, said Sister Tabissa, a member of the Little Sisters of Jesus who works in the intensive care unit.

She recounted what happened recently when the attacks on Christians were brought up as a topic in a hospital hallway.

“God doesn’t approve that brothers hurt each other,” she quoted a Muslim colleague as interjecting.