Pope denounces ‘poison’ of consumerism in ‘society based on profit’ 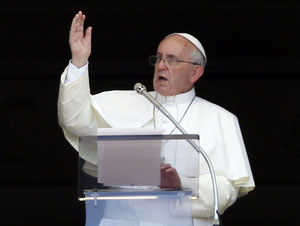 Pope Francis gestures as he leads the Angelus from the window of his studio overlooking St. Peter’s Square at the Vatican Aug. 4. (CNS photo/Stefano Rellandini, Reuters)

VATICAN CITY (CNS) — Pope Francis denounced consumerism as a poison that threatens true happiness, which comes from membership in the church.

The pope made his remarks Aug. 4, before praying the Angelus with a noontime crowd in St. Peter’s Square.

“The encounter with the living Jesus, in the great family that is the church, fills the heart with joy, because it fills it with true life, a profound goodness that does not pass away or decay,” he said.

“But this experience must face the daily vanity, the poison of emptiness that insinuates itself into our society based on profit and having (things), that deludes young people with consumerism,” he said.

“Young people are particularly sensitive to the emptiness of meaning and values that surrounds them,” he said. “And they, unfortunately, pay the consequences.”

“True wealth is the love of God, shared with one’s brothers, that love that comes from God and makes us share among ourselves, and makes us help one another,” the pope said. “He who experiences this does not fear death, and receives peace of heart.”

The pope also reflected on the Mass he celebrated July 28 in Rio de Janeiro, the culminating event of World Youth Day, which drew an estimated 3 million people to Copacabana beach.

“World Youth days are not ‘fireworks,’ moments of enthusiasm that end with themselves,” he said. “The youth are not following the pope, they are following Jesus Christ, bearing his cross.”

NEXT: Speaking of divorce, pope refers to practice of Orthodox churches