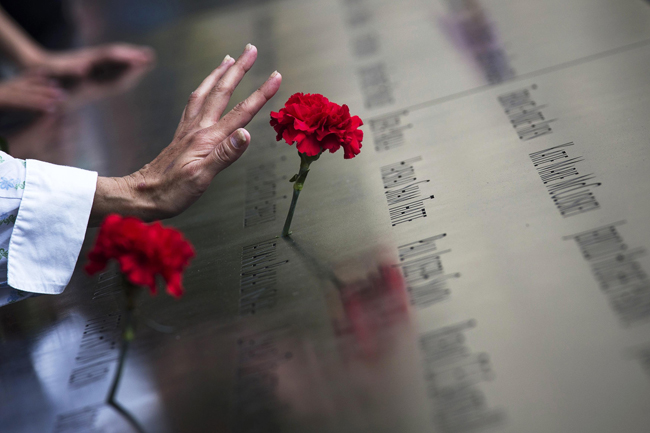 WASHINGTON (CNS) — Alyssa Badolato, a senior at The Catholic University of America in Washington, described the morning of Sept. 11, 2001, as her loss of innocence.

Badolato said she was 10 when the attacks of 9/11 took place.

“You didn’t think these things could happen in our country,” she said. “Now there’s this fear. We’re still feeling those effects.”

Badolato, former chairwoman of the College Republicans at Catholic University, is from Cherry Hill, N.J. She and other members of the university’s chapter of College Republicans helped hand out flags to students on campus on the 12th anniversary of 9/11 in remembrance of the lives lost in the terrorist attacks that claimed the lives of nearly 3,000 people in New York City, near Shanksville, Pa., and at the Pentagon.

Nicole Kolenberg, a sophomore from Stamford, Conn., said although she was in second grade in 2001, she remembers the news of the attacks vividly.

“It’s the first thing I remember so vividly,” Kolenberg said. “My parents came to pick me up from school. We went out in our boat and we could see the Long Island Sound in smoke. It was unreal.”

Kolenberg said flags were laid on the lawn of the Edward J. Pryzbyla University Center in loving memory of all the lives lost.

“We’re trying to fill the lawn up,” she said.

Kolenberg said the events of Sept. 11 were especially difficult for those in her community.

“It’s hard because we were so close to the city (New York City),” she said. “We lost a lot of people who were close to us.”

Tom Lahey, a sophomore from New Jersey, said he was also in second grade in 2001. Lahey said his father was stuck in the subway under the North Tower when that tower of the World Trade Center fell.

“He didn’t get home until 8 p.m. that night,” Lahey said. “He was covered in soot. A couple of my friends’ parents died.”

Students wrote the names of loved ones and prayers on cards where they laid their flags. Jax Descloux, a sophomore from Westchester County in New York, said her father also experienced a close call during the attacks. Descloux said her father used to work at the World Trade Center.

Freshman Dulan Jayawardane said his teachers tried to hide the details of the attacks from students at school.

“Our teachers tried to play it off as an early dismissal,” he said. “We overheard them talking.”

Jayawardane, who is from Bethesda, Md., was 5 in 2001. He said he felt frightened after he was picked up from school.

“I heard a plane overhead and got scared on my way home,” Jayawardane said.

Freshman Courtney Wosepka said she lived in Michigan on Sept. 11, 2001. Wosepka said although she was too young to remember the day’s events, she remembers sitting down with her parents a few years later with a postcard of the World Trade Center.