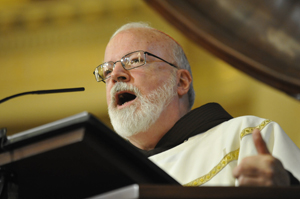 Boston Cardinal Sean P. O’Malley delivers a homily during Mass at the Louisiana Priests’ Convention Sept. 18 in New Orleans. In a talk at the convention, Cardinal O’Malley said he didn’t know what to expect from an upcoming meeting with Pope Francis about possible curial reforms. (CNS photo/Peter Finney Jr., Clarion Herald)

NEW ORLEANS (CNS) — Boston Cardinal Sean P. O’Malley, one of eight cardinals appointed by Pope Francis to advise him on possible reforms of the Roman Curia, said Sept. 18 he has received extensive feedback from cardinals and archbishops in the U.S. and Canada in preparation for an Oct. 1-3 meeting with the pope.

In New Orleans to celebrate Mass and preach at the Louisiana Priests’ Convention, Cardinal O’Malley said he did not know what to expect as a result of the gathering in Rome.

Cardinal O’Malley said the group of eight cardinals will meet first among themselves at the end of September and then with Pope Francis, before accompanying the pontiff to Assisi Oct. 4, the feast of St. Francis of Assisi.

Asked what his expectations were for the cardinals’ deliberations, Cardinal O’Malley smiled and said: “I don’t know. Obviously, there’s been many surprises in the last few months, and I think there’ll be more of the same.”

Cardinal O’Malley said he was “very surprised and honored” when Pope Francis asked him and the other cardinals in April to offer their feedback on the Curia. “It’s something new in the church, and it is, I think, an opportunity for the Holy Father to have more input from the entire church.”

Pope Francis established the so-called G-8 in April, giving it a mandate to advise him in the “government of the universal church” and his reform of the Roman Curia, the church’s central administration at the Vatican.

The Boston prelate said several of the cardinals on the panel had a preliminary meeting at World Youth Day in Brazil in July, and “we have been in correspondence with each other and with the Holy Father. Different cardinals have done different things to try and solicit ideas from a larger group.”

Cardinal O’Malley said he has met personally with the cardinals of the U.S. and written letters to the archbishops of the U.S. and Canada, various groups of religious and other individuals asking for any suggestions or feedback.

Analyzing the feedback, Cardinal O’Malley said “there were a lot of things that were similar. There was a certain pattern in the suggestions that came back. I think that will help to indicate the strength of interest in those areas.”

“I think for some time people have wanted to have more communication between the Holy See and the church in different parts of the world, the bishops’ conferences and the cardinals,” he continued. “The Holy Father, I think, has picked up on that and is trying to underscore the catholicity of the church.”

Cardinal O’Malley said he has been amazed at the way in which Pope Francis seems to have captured the world’s imagination in the six months since his election.

“I think he has been able to change the conversation about the church in a wonderful way in his very direct way of communicating his desire to be close to people,” Cardinal O’Malley said. “All of that has made a big impression. Of course, his emphasis on the social Gospel of the church has been a wonderful contribution to the church in the world today.”

Cardinal O’Malley said he was struck by the pope’s first trip to Lampedusa, where he threw a wreath in the water to honor thousands of refugees who had died seeking a better life. The southern Mediterranean island of Lampedusa is a major entry point into Italy for undocumented migrants from Africa.

“He talked about the danger of the ‘globalization of indifference,'” the cardinal said. “This is a man who is not indifferent to people’s sufferings and wants the church to be a church that reaches out.”

In his homily at a Mass at St. Louis Cathedral with 350 Louisiana priests, Cardinal O’Malley spoke about Pope Francis’ exhortation during a chrism Mass homily that priests, shepherds of their flock, “should have the smell of sheep.”

“In my life as a priest and a bishop, I think that’s the most quoted phrase from any pope,” Cardinal O’Malley said. “And, certainly, World Youth Day was probably the largest event in the history of our hemisphere, and it was just a great success. The Holy Father’s preaching is always so accessible.

“I think he touched the lives of young people, and being from Latin America, where half the church resides, his presence there was a great grace.”