Diocese of Gallup, N.M., poised to file for bankruptcy protection 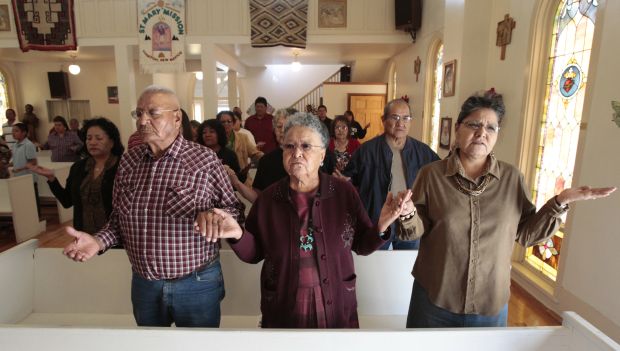 People pray during Mass in 2011 at St. Mary Church in Tohatchi, N.M., on the Navajo Indian Reservation in Diocese of Gallup. (CNS photo/Bob Roller) 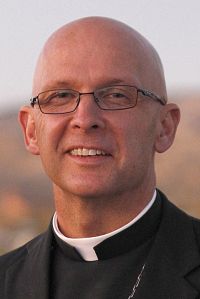 Bishop James S. Wall of Gallup, N.M., is pictured outside his residence in 2011. (CNS photo/Bob Roller)

GALLUP, N.M. (CNS) — When Bishop James S. Wall was installed as Bishop of the Diocese of Gallup in 2009, he knew there were festering issues regarding allegations of clergy sex abuse, but not to the extent that has brought the sprawling southwestern diocese to the doors of U.S. Bankruptcy Court.

At Masses throughout the diocese Aug. 31 and Sept. 1, shocked parishioners were read a letter from Bishop Wall saying that in the face of insurmountable lawsuits the diocese intends to file for Chapter 11 bankruptcy protection.

Bishop Wall set no date for the court filing in his letter, or how much in damages the diocese is facing. He could not be reached for comment.

Seven other U.S. dioceses have filed for bankruptcy protection in the aftermath of sexual abuse lawsuits.

Merritt Selleck, a parishioner at St. John Vianney Church, told Catholic News Service he was disappointed by the announcement but felt it may be the right step to take.

“I don’t think the bishop had much of choice given the number of lawsuits the diocese is facing,” Selleck said.

The Diocese of Gallup in northwestern New Mexico is the poorest diocese in the U.S., said Father Tim Farrell, diocesan spokesman, and includes the Navajo, Hopi, Zuni and parts of the Apache Reservations.

The strategy, Bishop Wall explained in his letter, will give the diocese the opportunity to present a reorganization plan that provides for a fair and equitable way to compensate those who were sexually abused as children by church workers and clergy as well as anyone who has not yet come forward with allegations of abuse but may do so in the future.

“I firmly believe that the process of Chapter 11 is the best and only way that will allow us to work constructively with all those who suffered from the sexual abuse,” Bishop Wall said.

NEXT: Rights of religious minorities must be protected, Muslim leader says