He used to be poor, but that was long ago 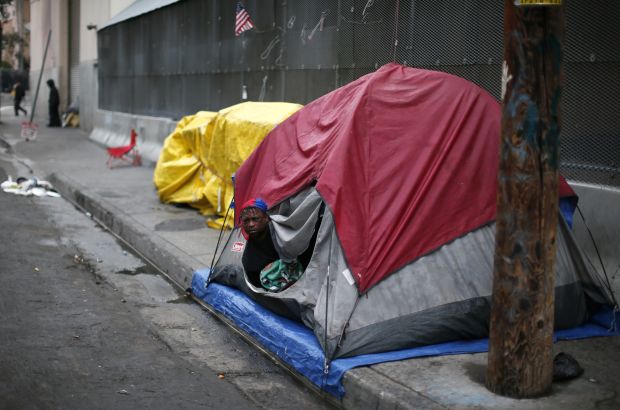 A man wakes up after sleeping in a tent on downtown Los Angeles' Skid Row in early March. There are 46.5 million people living in poverty in the United States. (CNS photo/Lucy Nicholson, Reuters)

Clarence Simmons is one of them. Few people know him as Clarence. “Call me Clay,” he says.

Simmons grew up in southern Pennsylvania, near Gettysburg and Chambersburg. But, as he neared his 30th birthday, Simmons, now 54, moved to Washington to be closer to his mother — who had amyotrophic lateral sclerosis, also known as Lou Gehrig’s disease — and his brother.

Simmons found the pace of life in Washington circa 1988 too hectic for his liking. And, despite the number of opportunities it seems would be available in a big city, he could not find a job for himself.

“The D.C. government, as far as employment services, it was just a mess,” Simmons told Catholic News Service in a Sept. 24 interview. But the one thing a city job counselor advised him was to visit Samaritan Ministries in a more pastoral area of the city, located in a large house close to Rock Creek Park and the Carter Barron Amphitheater.

If the Samaritan Ministries of 1988 was anything like the Samaritan Ministries of 2013 — featuring a Washington-area map with red-tipped pins showing the location of “member parishes,” and file folders affixed to bulletin boards showing “this week’s jobs” and “last week’s jobs” — then it was Samaritan that found a job lead for Simmons as a caterer’s assistant for a small firm downtown; he even remembers the address.

He worked there for a few years but found the work too cyclical for his liking. “There’d be times when you had to get up at two-thirty in the morning to get to work, and you’d be working until nine o’clock in the evening,” Simmons said. “Other times, you’d have enough work for maybe four hours a day.”

But, in the quest to improve himself and his standing, Simmons picked up “Spanglish” from the Hispanic residents of his Washington neighborhood. He also discovered that customer service seemed to be his niche. He found sales jobs at since-closed clothing and hardware stores in Washington to be to his liking.

Simmons also started getting work at embassies. He had saved enough to travel abroad, visiting Serbia and Montenegro, and learning enough Korean to work at the Korean embassy. While he prides himself on being able to figure out what a Korean attache speaking English may be saying in a thick accent, he said he prefers to spend his time with the other embassy workers and learn more about their respective cultures.

He said he returns to Samaritan Ministries from time to time to check on his skills, and also to talk with new clients about getting jobs and stabilizing their home life before it spirals downward.

NEXT: Family, with help from Catholic shelter, seeks to get back on feet