Washington cardinal urges Catholics to create a ‘civilization of love’ 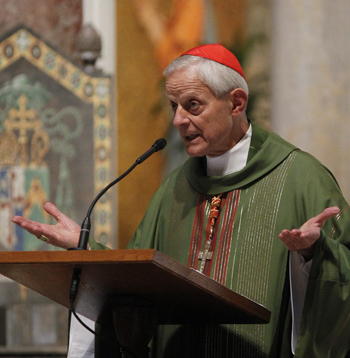 Cardinal Donald W. Wuerl of Washington delivers the homily during a Mass for consolation and healing at St. Matthew’s Cathedral Sept. 17, a day after a deadly shooting spree at the Navy Yard in Washington. (CNS photo /Bob Roller)

WASHINGTON (CNS) — One day after the tragic shooting at the Washington Navy Yard, Cardinal Donald W. Wuerl celebrated a Mass for consolation and healing in which he prayed for the victims of the rampage and asked God to “heal the wounds in our society so that we can prevent tragedies such as we have just witnessed.”

“We commend to the hands of our merciful and loving God, who alone can judge human hearts, the souls of all who died yesterday,” Cardinal Wuerl said Sept. 17. “We pray for not only the healing of those who are recovering from this violent attack but also for a greater healing, a healing that touches what is wounded and broken in our world.”

The Washington cardinal was the main celebrant of the Mass at the Cathedral of St. Matthew the Apostle. Several priests concelebrated the midday liturgy, which was attended by about 250 people.

The Mass was offered, Cardinal Wuerl said, because “we know our prayer will be joined to the great prayer that Jesus offers with us and for us.”

On Sept. 16, just as the workday began, a gunman went on a shooting rampage at the Washington Navy Yard, killing 12 and injuring at least 14 others. The FBI later identified the shooter as Aaron Alexis, a 34-year-old former naval petty officer who was a military contract worker. Alexis was killed after a shootout with law enforcement officers.

“Death came suddenly and in an unexpected manner to those at work at the Navy Yard. It is a reminder to all of us that we know not the day nor the hour of death’s visitation,” Cardinal Wuerl said in his homily. “Jesus calls us always to walk in a way that we can go to meet him when that moment comes.”

All of the shooting victims were civilian employees at the Navy Yard or military contractors working there. No active military personnel were killed, but at least one D.C. Metropolitan Police officer and a Navy Yard security guard were among the injured.

The Navy Yard is home to the Naval Sea Systems Command, which includes the headquarters of Navy command staff. The facility oversees the engineering, construction and maintenance of the Navy’s ships, submarines and combat systems.

Early reports had suggested that there were one or two additional gunmen involved in the attack, but later police officials said that Alexis apparently acted alone.

In his homily at the Cathedral of St. Matthew, Cardinal Wuerl called on the faithful to recognize that “something is wrong, that sin still persists in our world. ”

“Our prayer for healing is offered as well for whatever it is that fostered such a culture of violence, a culture of death,” he said.

“Somehow we need, once again, in our country, in our land, in our nation, to foster that healing that comes only when we recognize there is a right and a wrong, that we are not free to kill,” Cardinal Wuerl said. 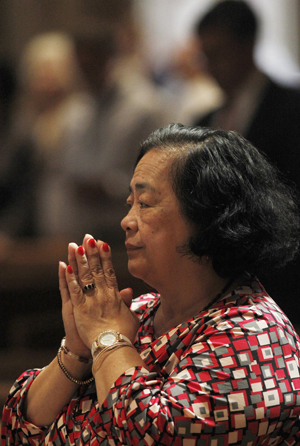 A woman prays during a Mass for consolation and healing Sept. 17 at St. Matthew’s Cathedral in Washington, D.C. (CNS photo /Bob Roller)

“The church, over and over again … calls us to love one another,” he told the catholic Standard, newspaper of the Washington Archdiocese. “Love alone can conquer violence. Love alone can bring consolation and healing. Love alone supersedes and is victorious, even over death.”

He added that attending the Mass and hearing the cardinal’s call for all faithful to pray “makes me feel a little better, like we are all in this together.”

For Arnetta Pena, the Mass was an appropriate place “to beg God to stop this violence. It’s like the whole world has become one big war zone.”

Tom Malarkey, who served as a lector at the Mass, said the liturgy “is a start to the healing process.”

Massgoer Richard Pacheco said it was appropriate that the cardinal celebrated a Mass for Consolation and Healing in the wake of the Washington Navy Yard shootings. “We pray for their souls. We’re Catholics, that’s the first thing we do. The first thought is for the souls of the departed.”

A former State Department worker, he said the shootings were like deaths in the family for a city with so many government workers. Pacheco said it is important for Catholics, as people of faith and as members of the community, to pray for consolation of surviving family members and friends, and to pray for healing for the community.

Pacheco said Cardinal Wuerl’s message about the importance of allowing God’s love to transform one’s heart, and then to help build a civilization of love and a better world, “is what every Mass is about, and what the prayer of the church is about. We’re here to love each other.”

He said the tragedy at the Navy Yard — apparently by a mentally ill men with a history of violence — is a reminder to people to reflect on “what have we done in our lives to love each other, and take care of people who have problems?”

Szczepanowski is on the staff of the Catholic Standard, newspaper of the Washington Archdiocese.