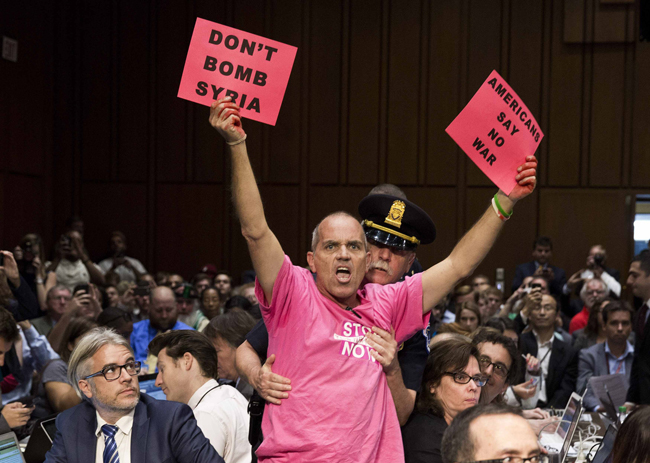 “The bishops denounce the use of chemical weapons in Syria, but they call for being aware of the risks of a potential military strike,” the bishops said in a statement following their monthly meeting Sept. 4.

The bishops said foreign intervention poses “grave, grave dangers and repercussions of severe consequences for the countries of the region” and stressed that the war in Syria should be resolved “diplomatically and peacefully, away from the use of arms.”

U.S. President Barack Obama is seeking approval from Congress to go forward with military action against the regime of Syrian President Bashar Assad.

The office of the U.N. Higher Commissioner for Refugees said Sept. 1 that the number of Syrian refugees in Lebanon had reached more than 716,000.

The bishops praised Pope Francis’ call for prayer, fasting and repentance for peace in Syria and his direct appeal to the international community for dialogue and negotiation for peace.

They urged parishes and monasteries to organize participation with Pope Francis in his prayer vigil in St. Peter’s Square Sept. 7 and urged local Catholics to spend that evening in prayer and repentance.

The council’s meeting at the Maronite patriarchal summer seat in Diman, in northern Lebanon, was attended in part by caretaker Prime Minister Najib Mikati, who later held a closed-door meeting with Cardinal Bechara Rai, Maronite patriarch.

The bishops reiterated their plea for a new Cabinet to be formed to address challenges facing the country. Lebanon has been without a government since March.

“Given the dangers threatening Lebanon from both inside and outside the country, the bishops call on state officials … to overcome all barriers dividing them and make a Cabinet capable of confronting dangers and of protecting the Lebanese people and constitutional institutions from total collapse,” the bishops said.

“It is about time to realize that if the nation falls apart, we will all fall with it,” they said.

The bishops denounced August bombings that rocked the southern suburbs of Beirut and Tripoli, killing more than 70, wounding hundreds and putting Lebanon “on the brink of sectarian strife and civil war.”

They praised the patriarch for visiting the targeted areas and offering condolences to the victims of the attacks.

The bishops also expressed appreciation to Lebanese expatriates who visited the country in the summer despite “the wars and turmoil in the region in addition to paralysis in Lebanon, which have negatively affected tourism.”

NEXT: With future uncertain for Syria, U.S. cardinal says prayer is needed