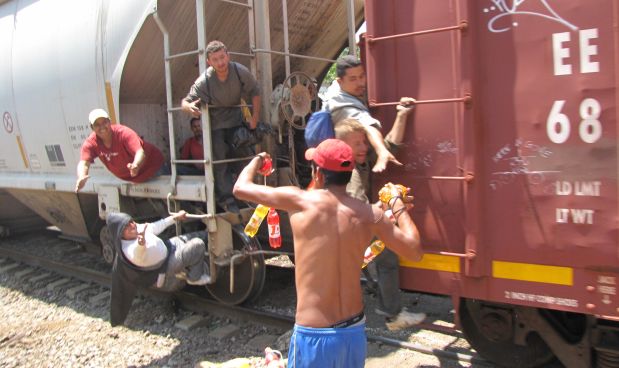 “Let us act so that this situation may be resolved; that people have the right to free transit; sufficient security to reach their destination; (and) … in their own nation, possibilities for development, security and peace,” said the statement, signed by Bishop Guillermo Ortiz Mondragon of Cuautitlan, director of the ministry.

The cargo train, commonly called, “The Beast,” derailed early Aug. 25 in Tabasco state. An increasing number of Central Americans cross into Tabasco from neighboring Guatemala to steal rides atop trains transiting the country.

The Tabasco state government said theft of railway parts weakened the tracks and caused the derailment.

Cardinal Norberto Rivera Carrera of Mexico City asked prayers for the victims during Mass Aug. 25 and expressed condolences to their families.

“The system, in general, continues being deaf and dumb in the face of this everyday reality. There was only a tepid reaction when the tragedy occurred,” it said.

“In some way, we are all responsible. What are the Interior Ministry officials doing? What are our legislators doing? What is the response of civil society organizations? What are human rights commissions doing? The reality is that we can expect little from our corrupt and disorganized immigration officials’ system,” it said.

The derailment once again demonstrated the risks run by Central American migrants as they attempt to reach the United States. Many of the migrants are fleeing violence in Central America, but encounter danger in Mexico as organized criminal groups target them in kidnappings.

Father Tomas Gonzalez Castillo, who operates a shelter for migrants in Tabasco, says northbound trains have been targeted by organized criminal groups, who charge migrants $100 to climb aboard.

NEXT: Writing to Putin, pope leads diplomatic push against strikes on Syria