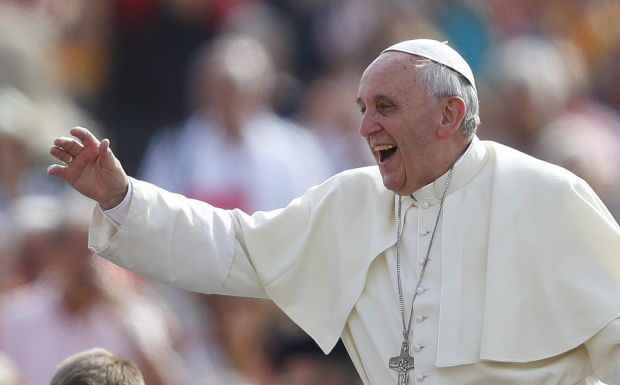 Pope Francis greets pilgrims as he arrives to lead his general audience in St. Peter's Square at the Vatican Sept. 11. (CNS photo/Paul Haring)

VATICAN CITY (CNS) — Picking up the telephone and calling people out of the blue is no big deal for Pope Francis, according to a Vatican official.

Msgr. Dario Vigano, director of the Vatican Television Center, said the pope told him that the many calls the journalists have brought to light are just the tip of the iceberg: “Good thing they don’t know about all the ones I have made!” the pope reportedly said.

In an interview Sept. 13 with Famiglia Cristiana, an Italian Catholic magazine, Msgr. Vigano said that during a recent meeting with the pope, he asked the pontiff about the media frenzy over reports of papal cold calls.

The monsignor said the pope looked at him amazed and said, “Tell the journalists that my calls are not news.”

According to Msgr. Vigano, the pope said, “That’s the way I am; I’ve always done this, even in Buenos Aires,” where he served first as auxiliary bishop beginning in 1992 and archbishop from 1998 until his election as pope this past March.

He said the pope explained how any time he got “a card or a letter from a priest having difficulties, from a family or a prisoner, I would respond.”

The pope said, “For me, it’s much easier to call, to ask about the problem and suggest a solution, if there is one. Some people I call, others I write to instead,” according to Msgr. Vigano.

The monsignor told the magazine he has gotten several calls himself from the pope and not all of them were work-related. “Once he called me at the office to wish me happy birthday.”

The head of the Vatican’s television production center said the constant stream of papal calls signals a kind of telephonic pastoral care.

Being able to hear someone’s voice allows the caller to understand the feelings of the person on the other line and get “in tune with” the person’s problems and needs, he said.

Getting a call from the pope sends a strong signal that God cares, he said.

If the pope “takes it upon himself to call me, it means I am special to him and above all in God’s heart,” he said.

A number of people have come forward telling news outlets they have received calls from Pope Francis. Among those reported include a divorced pregnant woman who said the pope offered to baptize her baby after she wrote saying her boyfriend insisted she have an abortion. There were also reports that the pope responded to a rape survivor’s letter.

The Vatican has declined to confirm or deny the reports but confirmed the pope does make frequent calls.

The Vatican said the pope made only one call to France in early September to Cardinal Philippe Barbarin of Lyon and to no one else, in an effort to deny, without making specific mention of, a claim by a young man in France who said the pope called him and said his homosexuality “didn’t matter.”

The pope’s habit of making calls to people who write him makes it easier for pranksters to pretend to be the pope over the phone.

NEXT: Under Pope Francis, liberation theology comes of age