Praying for peace in Syria, pope calls selfishness the cause of war 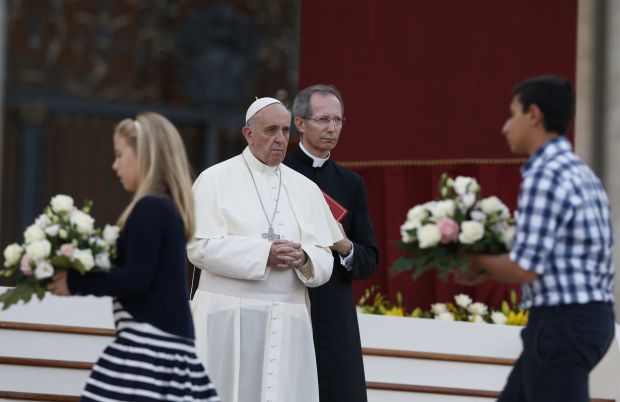 Pope Francis looks on as children carry flowers at the start of a vigil to pray for peace in Syria in St. Peter's Square at the Vatican Sept. 7. (CNS photo/Paul Haring)

VATICAN CITY (CNS) — Leading a crowd in prayer for peace in Syria, Pope Francis said that war is ultimately caused by selfishness, which can be overcome only though expressions of fraternity and never with violence.

“Leave behind the self-interest that hardens your heart, overcome the indifference that makes your heart insensitive towards others, conquer your deadly reasoning, and open yourself to dialogue and reconciliation,” the pope said Sept. 7 before an estimated 100,000 people in St. Peter’s Square.

The pope had called the prayer vigil less than a week earlier, as the central event of a worldwide day of fasting and prayer for peace in Syria, the Middle East and the world.

The Vatican called the vigil an unprecedented papal gesture for peace, by virtue of its scale and prominence of location. It took place the same day that U.S. Secretary of State John Kerry met with European leaders to make President Barack Obama’s case for a military strike on the government of Syria President Bashar Assad, as punishment for the alleged use of chemical weapons in the ongoing civil war there.

The pope’s homily, which took up about 15 minutes of the four-hour liturgy, did not refer to contemporary events but spoke in biblical terms about the nature of war, whose origins he traced to the fall of Adam and the first murder, by Cain of his brother Abel.

Answering Cain’s famous question to God — “Am I my brother’s keeper?” — the pope replied: “Yes, you are your brother’s keeper! To be human means to care for one another.”

“We bring about the rebirth of Cain in every act of violence and in every war,” the pope said. “All of us!”

“When man thinks only of himself, his own interests and places himself in the center, when he permits himself to be captivated by the idols of dominion and power, when he puts himself in God’s place, then all relationships are broken and everything is ruined,” the pope said. “Then the door opens to violence, indifference and conflict.”

The pope concluded on a hopeful note, asking the crowd: “Can we get out of this spiral of sorrow and death? Can we learn once again to walk and live in the ways of peace?”

“Yes, it is possible for everyone!” he said, drawing applause, and he then invoked the image of Christ’s redemptive sacrifice as the ultimate symbol of peace.

The pope’s homily was followed by a period of eucharistic adoration, including several stretches when all present stood or knelt in silence, without any musical accompaniment.

At other times, as during the praying of the rosary in the first half of the vigil, prayers and readings alternated with music or performances on the organ, the harp and other string instruments.

During the adoration, people representing five different countries or regions with direct or indirect links to the Syrian conflict — Egypt, the Holy Land, Russia, the United States and Syria itself — brought up incense to burn in a brazier beside the altar. Ten students from the North American College, the U.S. seminary in Rome, served as attendants.

The ancient icon of Mary known as “Salus Populi Romani” (health of the Roman people), which had been transported for the occasion from Rome’s Basilica of St. Mary Major, stood on an easel beside the altar. The icon has special importance for Pope Francis, who went to pray before it on the first morning of his pontificate in March.

The atmosphere in the square was solemn, with none of the festivity of a Sunday Angelus or Wednesday public audience. Security guards confiscated flags and placards, though some Syrian flags and signs criticizing Obama could be seen on the periphery of the square.

For more than an hour prior to the vigil, and then for the duration of the event, priests heard confessions in the square, sitting face to face with penitents on simple wooden chairs.

Many in the congregation clapped and cheered when Pope Francis came out of the basilica at 7 p.m., but soon fell silent when they noticed his serious demeanor and his failure to wave or smile.

At the end of the liturgy, just before 11 p.m., after the pope had returned to the basilica, the crowd applauded again. Pope Francis came out to offer a few final words, thanking the congregation for their company and asking them to continue praying for peace.

“Good night and have a good rest,” he said.

NEXT: Thousands flock to Rome armed with power of prayer in fight for peace