Neumann U. awarded $56,000 for student scholarships 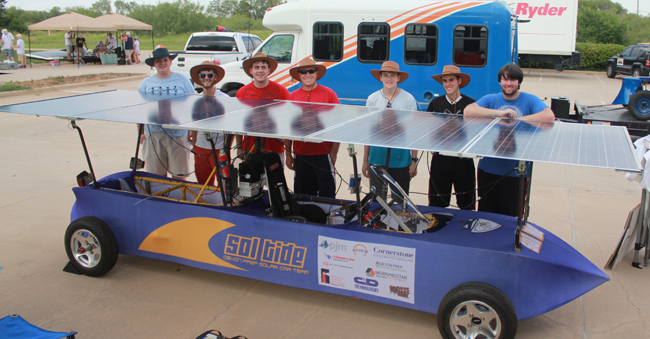 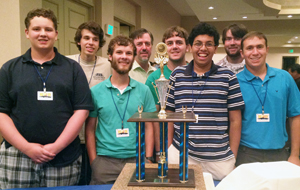 Three years ago Jacob Riedel of Pottstown, a member of Devon Prep’s class of 2013, wanted to organize Devon Prep’s first solar car club. He enlisted several fellow students who shared an interest in ecology, engineering and cars.  He was not exactly sure of what he was getting himself into, but he was determined to see it through.  Riedel planned to build a solar car and race it on the open road.

This past summer, with the support of parents, friends, school, and corporate sponsors, Riedel and his team achieved what he set out to do.

Devon Prep’s solar car team, named the Devon Panel, with Riedel as its captain, completed the 2013 Solar Car Challenge, an 884-mile open road race from Fort Worth, Texas to Los Angeles, Calif. This eight-day race draws teams from high schools across the country, including New York, Florida, Texas, California, Michigan and Mississippi. Devon Prep’s team is the first and only team from Pennsylvania to participate.

After completing 516.6 miles through Texas, New Mexico, Arizona and California in scorching heat, wind storms and rain, the Devon Panel arrived at the finish line in Los Angeles in fourth place, taking home a sizable trophy.  At that point the solar car journey was officially over for Riedel, having graduated from Devon Prep a month earlier. He accomplished his goal and even won a prize doing so.

“When I first heard about this project I thought it was a really cool idea,” Riedel said. “I’m interested in ecology and this seemed like a great way to get into green technology. I’ve learned so much. I know about battery power, motors, how the strength of steel is determined, how solar panels are made. It’s been a great experience.”

Since team’s journey began in 2010, members have had to work not only in building a solar car from scratch, but also building a bank account. A project like this is not easy or inexpensive so they devised a mission statement, created a Facebook page and a website and researched how to solicit for donations.

With help from parents, school administrators, friends and alumni they raised thousands of dollars, gleaned valuable information and acquired critical equipment free of charge, such as the costly solar panels donated by Newark, Del.-based Motech Industries.

With determination, patience and diligence the team constructed “Sol Tide.” The car measures 15 feet long by two feet wide and is covered with five solar panels. It can travel as fast as 43 m.p.h., but was driven about 22 m.p.h. throughout most of the recent open road race.

Sol Tide has undergone several mechanical upgrades and cosmetic changes since its inception, but its “soul” remains the same.

The Devon Panel raced Sol Tide in the 2011 and 2012 Solar Car Challenges, finishing in fourth place in 2011 and second in 2012.  Both of those races, however, were on a closed track at the Texas Motor Speedway.

This year would be different. So the team, comprised of 11 Devon Prep high school students under the supervision of their moderator, Eric Riedel, Jacob’s dad, went to work to get Sol Tide ready for the open road.

“We had to get a new motor controller which allows us to control how fast we set the car. We upgraded the motor for more torque, got new batteries, and Motech donated two new solar panels,” Riedel said. “We also redesigned the skin from last year. We changed the color to blue, added all of our sponsors’ logos, the Devon Prep logo and the name of the car. In my opinion it was an upgrade.”

The logistics of getting everyone where they needed to be from Pennsylvania, to Texas, to California and back was another challenge for the team. They had to plan who would drive the trailer (holding the car) from Devon to Texas and who would drive it back from Los Angeles.

They needed to rent hotel rooms, buy airline tickets and rent lead and chase vehicles for the race. Not to mention mapping out their strategy for the race itself.

“The race is rated with a combination of mileage and time,” said three-year Devon Panel team member and senior Michael Horbowy of Malvern. “Since it’s on the open road there will be hills and everything, so you have the option of putting the car in the trailer and taking it up a hill so you don’t deplete your batteries too much. But every time you do that the miles that you drive in the trailer count against you. Since you have to accumulate as many miles as possible, you have to figure that all out.”

Once they were in Texas Sol Tide went through two days of qualifying tests, known as scrutineering, before the Devon Panel was allowed to participate.  After passing the qualifying tests, the first day of the actual race proved disappointing for the team.

“During the first day of the race, our gear shredded the bolts holding it on and flew out of the car,” Riedel said. “When we pulled off to the side of the busy highway, we then noticed that the gear had ripped our brake line as well.  We made the choice to trailer to the next rest stop which was several miles away.”

The team worked diligently to fix the problems and fortunately they were able to make up many of the miles. The rest of the race included hours of driving through small towns and on major highways.  The weather was often dry and sunny, which is great for the car’s batteries. But there were also torrential downpours, cloudy days and lots of wind.

Along the way the participating teams stopped to display their cars to local residents and talk to the press. They even squeezed in a little sightseeing at night.

Arriving in Los Angeles was bittersweet for the team and especially for Riedel. They managed to accomplish their goal and finish the race, but the long anticipated event was now over. It was time to pack up the car and head home.

“The road race was a ton of work, but the thrills and experiences made it worth the effort,” said junior Evan Hennessy of Paoli. “We are already brainstorming ideas for how to improve the car for next year’s challenge. The entire trip was fantastic and memorable.”

For Riedel, the time, effort and late nights put into this project were more than worth it. He credits the experience with giving him direction for the future.

“It’s been a great three years,” he said. “Last year was definitely difficult; it was a lot of driving. This year was the most rewarding.  I think the experiences that I’ve had with the car are what led me to the college that I chose and the degree that I’m going to pursue, which is electrical engineering. I would have had no idea what I wanted to do without the solar car. So it was really a way for me to find myself.

“I learned the importance of cooperation and working as a team to complete a large scale project,” the soon to be Olin College freshman said. “The first year that we went into this we built the car in a matter of months. I think what we did was truly incredible. We had a lot of determination among the team and we just really worked hard to get it done.”

Riedel said he was proud of his team “for being able to push through all of the obstacles and never giving up. Through this program,” he said, “I learned so much, not only about mechanics and engineering, but what we can accomplish when we work together.”

See more photos of the Devon Panel during the 2013 Solar Car Challenge on the Devon Prep website, and read the team’s daily blog from the road race.

Devon Prep is a private, Catholic, college preparatory school for young men in grades six through 12 conducted by the Piarist Fathers and located on Philadelphia’s Main Line. Devon Prep will host an open house on Sunday, Oct. 13 from 1-4 p.m. on its 20-acre campus on North Valley Forge Road in Devon. For more information contact the admissions team at 610-688-7337, email admissions@devonprep.com, or visit www.devonprep.com.

NEXT: Neumann U. awarded $56,000 for student scholarships