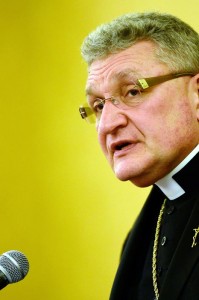 Speaking on the Catholic Church’s role in the public square, Pittsburgh Bishop David A. Zubik told a group of state legislators and his fellow bishops of Pennsylvania that religious freedom has never been understood in such a restrictive fashion as it is today.

“You and I face a highly organized and well-funded crusade to block the Church from the public square,” he said, pointing to religious freedom as “our right as citizens to live our faith in the faith in the world according to the dictates of our own consciences, not the dictates of secular society.”

Bishop Zubik made the remarks Sept. 25 in Harrisburg at a special breakfast hosted by the Pennsylvania State Council of the Knights of Columbus and the Pennsylvania Catholic Conference (PCC) to bring together the bishops of Pennsylvania with state legislators and other elected officials, including Gov. Tom Corbett.

The breakfast is held every other year during the bishops’ annual meeting as the Board of Governors of the PCC.

“The bishops enjoy the opportunity to visit with the legislators of their diocese in a spirit of fellowship and friendship,” Robert J. O’Hara Jr., executive director of the PCC, said of the event.

“Faith communities have a duty to engage in the public square. This breakfast is an example of building those relationships.”

As the public affairs agency for the Church in Pennsylvania, the PCC formulates policy positions on state government programs, legislation and policies that affect the common good and the interests of the Church.

“The freedom to worship is only a small part of what is meant by freedom of religion under the Constitution,” Bishop Zubik said. “The beauty and richness of the American experience of religious freedom is more than just the right to show up to a church, or a temple or a mosque and privately worship.

“Religious freedom has always meant the freedom to both active discipleship and the freedom to hold true to one’s beliefs and moral tenets. It includes the rights of religious believers, leaders and communities to engage society, to work actively and to express our views in the public square to make society a better place in which to live. It includes the right of religious believers, leaders and communities to hold fast to their beliefs and moral principles without interference.”

Bishop Zubik stressed that believers have the right and the duty to make an impact on society based on their beliefs. 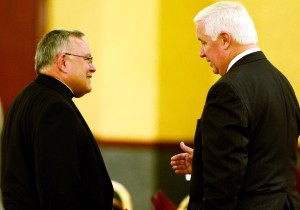 The biennial event was initiated by the State Council of the Knights of Columbus. Internationally, the Catholic fraternal organization promotes charity, unity, fraternity and patriotism while promoting and defending the Catholic faith.

“We work very closely with a lot of legislators in many different states in trying to bring the Catholic perspective to them,” said Eric Johnson, state deputy of the Knights’ Pennsylvania State Council. “This breakfast is a way that we can help bring that perspective.”

Jen Reed is managing editor of the Catholic Witness, newspaper of the Diocese of Harrisburg.

NEXT: Thousands from Philadelphia parishes honor Mary in ‘America’s Church’