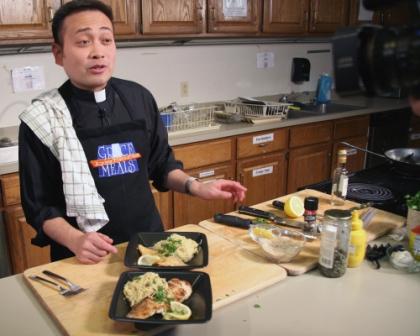 When St. Philip Neri School in Pennsburg closed last year, the parish refused to see the closure as an ending, but rather as a beginning.

“As Catholic Christians, we know that out of death comes new life in Christ’s resurrection, and out of the death of our grade school comes new life in the form of our Catholic Family Life Center,” said Father Robert A. Roncase, pastor of St. Philip, located in northwestern Montgomery County.

The Family Life Center recently opened in the building of the former parish school, which will offer parishioners a wide variety of opportunities to socialize outside of the celebration of the Eucharist each weekend. Age appropriate events scheduled for the fall season include classes in various styles of dance, financial planning, wine tasting, art and cooking, along with book clubs, Bible study groups and Church history discussions.

“The burning question is, ‘How do we keep Catholics together?’ And while Catholic education is very important, faith must grow within the home,” said Father Roncase.

A special kick-off for the Family Life Center — a cooking demonstration and lecture — was presented Sunday, Oct. 13 by Father Leo Patalinghug, a priest well known for his cooking program on EWTN called “Savoring Our Faith” and for authoring a cookbook called “Grace Before Meals: Recipes for Family Life.”

Father Leo was born in the Philippines and raised in Baltimore, Md. Prior to entering the seminary, he pursued studies in writing and political science, and holds a black belt in Tae Kwon Do. He was ordained for the Archdiocese of Baltimore in 1999, and has served as a parish priest and on the faculty of Mount St. Mary Seminary in Emmitsburg, Md. He has a special passion for bringing families closer together, and mending relationships between teenagers and their parents.

“My apostolate is to strengthen families around the dinner table,” said Father Leo. “People are hungry for what they refer to as a ‘new side’ of their faith and the Church, but I prefer to call it a ‘renewed side.’”

Ironically, his unexpected celebrity started out as purely a joke, which somehow caught on and spread before he realized what was happening. The idea of a Rachael Ray-like cooking show, with the conversation topics being about faith, was mentioned briefly during a gathering with priest friends. “The three fastest ways to spread an idea around are telephone, telegram, and tell a priest,” he quipped. “Before I knew it, the Archbishop of Baltimore was asking me about the rumor he heard, and before I could tell him it was just a joke, he said it was a very inspired idea.”

Kathy Wroblewski is a parishioner of St. Philip Neri, and didn’t fully know what to expect when she attended. “He was awesome, and has a very unique way of making people think about the truth,” she said.

Fifteen-year-old August Sodano, a freshman at Quakertown High School and a member of the youth group at St. Isidore Parish in Quakertown, also enjoyed the presentation. “Father Leo was very funny, and the food was really good too!” Sodano said.

Father Leo pointed out that Jesus’ first two miracles, the changing of water to wine at the Wedding Feast in Cana, and the multiplication of the loaves and fishes, revolved around food in social and teaching settings. He also mentioned that Christian feast days such as Christmas and Easter all have special food traditions attached to them, regardless of the culture in which they’re rooted.

“Even St. Patrick’s Day brings us corned beef and cabbage, along with green beer, and as we are all Irish on March 17th, I am known as Father Lee O’Patalinghug for those 24 hours each year!”

As the Catholic Family Life Center is a new beginning, with the goal of breathing a new social life into the members of St. Philip Neri Parish, Father Leo recommended to the audience of all ages that “all talents, including crazy ones like mine, should always be used for the praise and glory of God.”

George Gregory is a freelance writer and member of Our Lady of the Rosary Parish, Coatesville.