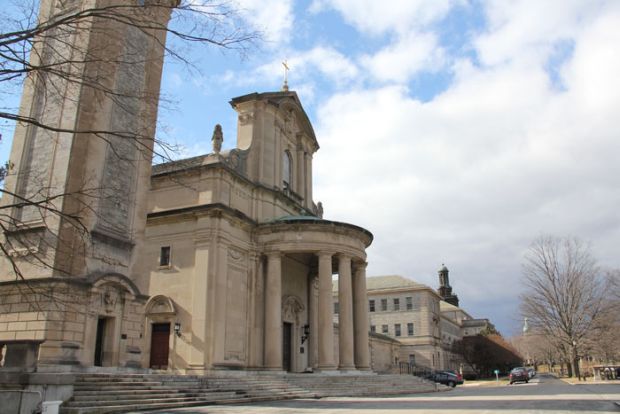 St. Martin's Chapel stands in the foreground of the College Division building at St. Charles Borromeo Seminary in Wynnewood. (Photos by Sarah Webb) 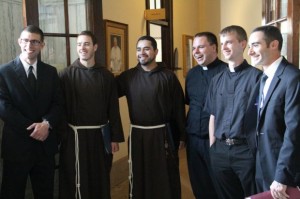 Seminarians from the Archdiocese of Philadelphia and other dioceses and religious orders in the United States studying at St. Charles Seminary welcome new seminarians for the fall term this year.

The panel also called for a strategic plan to be implemented over the next three to five years to provide a vibrant, sustainable house of formation and education for future generations of seminary students.

(The Graduate School of Theology and Program of Catholic Studies, as well as the Department of Permanent Deacons and Vocation Office for Diocesan Priesthood also operate at the seminary.)

In March it was announced that the huge College Division building, opened in 1928, will be closed and the seminary will be consolidated in the buildings that now house the Theology Division, with 45 of the seminary’s present 75 acres to be sold.

At the time of the appointment of the task force the main question put to it was should the College Division close entirely?

The recommendation of the task force, which was chaired by Neumann University President Dr. Rosalie M. Mirenda, was that the College Division be re-established at the Theology Division site, rebranded the St. Charles Borromeo Seminary College and “marketed as a totally renewed institution, maintaining academic excellence and high standard of preparation for the evangelical and pastoral work of future priests.”

“Implementing the recommendations of the task force will allow the College Seminary to grow in size and adapt to the needs of today’s students,” said Bishop Timothy C. Senior, rector of St. Charles Borromeo Seminary. “We’re taking a nationally recognized college program to the next level. Considering the overwhelming support and resources available to us, the potential of the College Seminary is unlimited.”

It would not have been surprising had the task force recommended to close the College Division. In past generations most seminaries offered undergraduate and at times high school programs, but today very few do so. Men who come to these seminaries pre-college usually receive spiritual formation at a house of studies with academic courses taken at a nearby college or university. By remaining open, the Seminary College fills a need well beyond the borders of the Archdiocese of Philadelphia. 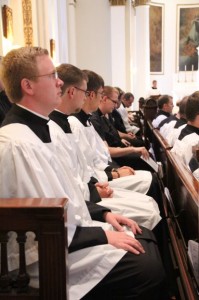 Seminarians pray during a liturgy at Immaculate Conception Chapel on the seminary’s Theology Division campus, which will be renovated to accommodate the Seminary College program and students.

“We pray that the work accomplished and the report provided are truly assistive to the Board of Trustees of St. Charles Seminary and that the college program will stand as a distinctive institution of high learning that enthusiastically welcomes students from our archdiocese, as well as across the United States and beyond, preparing them for life and for the journey to the priesthood,” Mirenda said.

The College Seminary building opened in 1928 with approximately 200 students, and an estimated capacity of 400. The Theology side had about 178 students. The peak student body for the entire seminary was 534 in 1960 and the peak ordination year was 1939 with 51 priests ordained.

Clearly, moving the entire seminary into the huge, 285,000 square foot College Division building would not begin to fill it, and because of deferred maintenance, it would cost many millions to rehabilitate the largely vacant building. For this reason, it was decided to move the newly constituted St. Charles Borromeo College Seminary into the Theology Division complex.

At this time the main building of the Theology Division, erected in 1871, is also largely vacant except for mostly offices on the first floor. The seminarians in pre-theology, theology and the spirituality year live either in adjacent St. John Vianney Hall or St. Edmond’s Hall. Each has a capacity of 90 seminarians.

Under current plans the Seminary College will have a capacity of 100 seminarians in the residential college program, which would bring the total for the entire seminary to 280, slightly more than twice the current enrollment. It would continue to serve the Permanent Diaconate program and the Graduate School of Theology.

Also attending for class studies will be seminarians of the new Neo-Catechumenal Way Seminary. Six men will begin studying for the movement at St. Charles and they will live apart in a Redemptoris Mater House of Studies. At ordination they will be incardinated to the Philadelphia Archdiocese but may at times be released for Neo-Catechumenal Way ministries.

It has not yet been decided if the upper floors of St. Charles’ main theology building will be renovated to house the College Seminary or if there will be new construction, according to Bishop Senior.

To ascertain the potential value of the portion of the seminary property to be leased or sold, the seminary has hired HFF L.P., a leading provider of commercial real estate and capital market services, as a consultant. 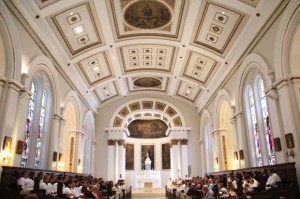 The portion of the property to be retained contains Immaculate Conception Chapel, which is quite attractive and more than adequate for the needs of the seminary. Located adjacent to the Theology Division buildings, the chapel was renovated in 2008.

Seminary officials hope the landmark St. Martin’s Chapel, which is attached to the College Division building, can also be saved but that is uncertain.

Rebranding the college means “we are going to be focusing on the college as a separate entity,” Bishop Senior explained. “We are going to talk about it as a college that has a unique mission – to form young men in accord with a program of priestly formation, apart from the Theology Seminary which is quite successful as well.

“We are not talking about a corporate break, spinning it off, but we would be looking for a separate advisory board, for example. It will focus exclusively on the needs of young men 18-22. We have an overwhelming majority in college of that age.”

Renovations or any new construction will be funded in part from the Heritage of Faith-Vision of Hope Capital Campaign, the sale of selected pieces of artwork from the seminary’s collection and a new capital campaign focused solely on the seminary.

As to what artwork might be sold, that has not been fully decided. The seminary has a number of museum-quality works of art donated to it over its 181 years of existence, not the least of them a series of clergy portraits painted by Philadelphia’s most famous artist – Thomas Eakins. 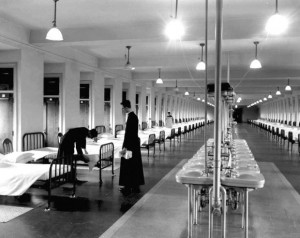 This undated photo shows the seminary’s barracks-style seminarian residence in the College Division as it appeared after the division opened in 1928. Interior walls to accommodate small, individual rooms for seminarians were added in 1952. (Philadelphia Archdiocesan Historical Research Center)

Clearly some of the artwork that is most identified with the history and mission of the archdiocese and seminary will not be sold, but others will.

“If we can’t maintain these things and they really don’t get seen by many people, doesn’t it make sense that we utilize these assets especially before we go out and ask the people of the archdiocese for money for the proposed renovations?” Bishop Senior asked.

The bottom line is that the College Program, reborn as St. Charles Borromeo College Seminary, is positioned not only to survive but grow, and in the process transform the entire seminary into an institution that could well become the premier house of priestly formation in the entire country.

PREVIOUS: Pennsburg parish sits down for a meal and talk with priest-chef