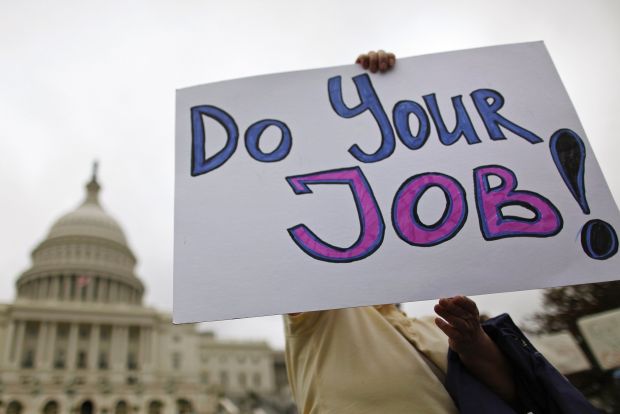 Federal workers demonstrate for an end to the U.S. government shutdown in front of the U.S. Capitol in Washington Oct. 13. (CNS photo/Jonathan Ernst, Reuters)

WASHINGTON (CNS) — The federal government shutdown is over, but the early prognosticators are picking winners and losers only on the political end of the equation.

Also to be counted in the calculations are those whose jobs are tied to the federal government, and the agencies who were further strained in helping them while waiting for government grants that wouldn’t come because there was nobody considered essential enough to process the checks to keep those agencies from facing a cash crunch.

“There’s no way to either draw the money down from the grants, or there’s no way to invoice the government,” said Candy Hill, executive vice president for social policy and external affairs at Catholic Charities USA. “There is this lag on the payables side that the agencies don’t have the bandwidth to sustain themselves less than 45 days out.”

With the start of the federal fiscal year Oct. 1 — the first day of the shutdown — any new programs had to be delayed. One case in point, Hill said, was a program by a Catholic Charities agency in Jackson, Miss., providing support services for military veterans. “But now they’re on hold because the money hasn’t been appropriated,” she added, and there was no way of knowing how long it would take for the funding to make its way through a pipeline that had been blocked for 16 days.

“We’re beginning to see elderly people coming into our agencies worried about next month’s Social Security checks and whether they’ll have enough to eat,” Hill told Catholic News Service Oct. 16, the day both houses of Congress approved a bill funding the government and extending the federal debt ceiling into early 2014. “We’re not sure on the debt limit side whether we’ll actually have enough (money) for Social Security checks,” she said, leaving seniors to make the choice either “to pay their rent or keep their lights on.”

For two days before the shutdown impasse was broken, Catholic Charities had garnered about 1,700 signatures on an online petition asking lawmakers to reopen the government, pay the national debt, and provide for a long-term spending plan for the future.

It was not only an issue of money being held up, but facing more people in need as a result of the shutdown.

Marcie Valdez, director of the food bank, said the agency has helped at least 70 families of furloughed federal workers since the government shutdown began. They get about $150 of food.

“Yeah, most of the families we are seeing, federal employees, are very stable individuals who have a solid income,” Valdez told Public News Service, a radio service based in Boulder, Colo. “They just maybe don’t have savings or family to lean on — just that unexpected loss of income.”

Valdez said many of the federal workers now being helped by the food bank have in the past donated food or volunteered at the agency. Having to ask for food to survive is not easy on people accustomed to earning a regular paycheck, she said.

“The demeanor from most of the folks we’ve seen, they’ve been very humbled,” she said. “It’s a very difficult thing to have to come into a food pantry and ask for help.”

In Virginia Beach, Va., home to a large naval installation, Hill said that Catholic Charities agencies there reported “the greatest impact they see is an increase in rental and utility assistance as people are furloughed.

The shutdown’s effects reached not just government workers, but also workers for companies with government contracts.

In Pensacola, Fla., “people are already coming in for rental assistance,” Hill told CNS. “They’ve already received letters saying they weren’t going to be called back until Oct. 31, and they weren’t going to receive any back pay.” Back pay for government workers was part of the Oct. 16 congressional package.

Even Catholic Charities agencies were feeling the pinch. Without any federal contract money coming in soon, one agency reported it may have to lay off some people. Catholic Charities of the Archdiocese of Washington, Hill said, was trying to “do their best with $25,000 a day not coming from Medicaid to assist their clients.”