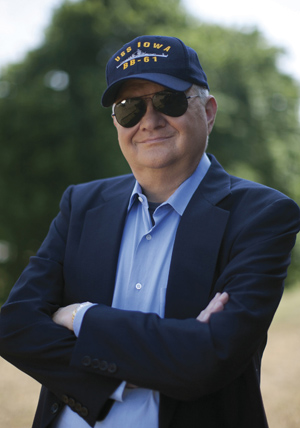 Author Tom Clancy is pictured in an undated photo at his home in Huntingtown, Md. Clancy, best known for works including “The Hunt for Red October” and “Clear and Present Danger,” died Oct. 1 at age 66 after a brief illness at Johns Hopkins Hospital in Baltimore. (CNS photo/courtesy David Burnett via Reuters)

BALTIMORE (CNS) — Even after Tom Clancy became an international best-selling novelist whose fans included the likes of President Ronald Reagan, the Baltimore-born writer never forgot the role his hometown Catholic education played in giving him the tools to his success.

“My Catholic education taught me the value of thinking for myself,” Clancy said in a 1990 radio ad promoting Catholic schools in the Archdiocese of Baltimore.

Clancy, best known for works including “The Hunt for Red October” and “Clear and Present Danger,” died Oct. 1 at age 66 after a brief illness at Johns Hopkins Hospital in Baltimore. His death was confirmed Oct. 2 by his publisher, G.P. Putnam’s Sons, but the cause of death has not been given.

Funeral arrangements were not immediately announced.

Clancy grew up in Baltimore and was a graduate of the former St. Matthew School in Northwood, Loyola Blakefield in Towson and what is now Loyola University Maryland.

More than 100 million copies of his novels are in print and all 17 of them have reached No. 1 on the New York Times best-seller list, including “Threat Vector,” which was released last December. His upcoming book, “Command Authority,” is set for publication Dec. 3.

Four of his books, “The Hunt for Red October,” “Patriot Games,” “Clear and Present Danger” and “The Sum of All Fears” were made into movies. A fifth movie, “Jack Ryan: Shadow One,” based on the hero of many of his novels, Jack Ryan, will be released this Christmas.

His first novel, “The Hunt for Red October,” written in 1984, was given as a Christmas gift to Reagan who quipped at a dinner that he was losing sleep because he couldn’t put the book down — a statement Clancy said helped make his book a best-seller.

In an interview with Catholic News Service in the mid-1990s, Clancy said Catholic schools taught him the same values that were being touted by then-Speaker of the House Newt Gingrich.

“God and country and family,” Clancy said. “All the stuff that should be ordinary, but isn’t.”

Catholic educators, including the School Sisters of Notre Dame and the Jesuits, also imparted a very important lesson for his line of work, he said: “I try real hard to make my deadlines.”

Clancy’s Catholic background was evident in some of the plotlines of his works. “Red Rabbit” is based on a fictional letter from Pope John Paul II to the communist government of Poland in which the pope threatens to resign the papacy and return to Poland to be with his people.

“The main characters in all my books try to get the right thing done, act with the proper motives, not to violate their own integrity,” Clancy told CNS.

Nick Alexopulos, media relations manager for Loyola University Maryland, said in an Oct. 2 statement that the Loyola community was “saddened” by Clancy’s death. Clancy graduated from Loyola in 1969.

“Mr. Clancy was a prolific author with a passion for storytelling that engaged people all over the world,” Alexopulos said. “He truly embodied the creativity we inspire our students and alumni to bring to their personal and professional lives, and we are proud to call him a member of the Loyola University Maryland family. Our prayers are with his family, friends, and classmates at this difficult time and in the days to come.”

NEXT: Polls show majority of U.S. Catholics have favorable view of pope